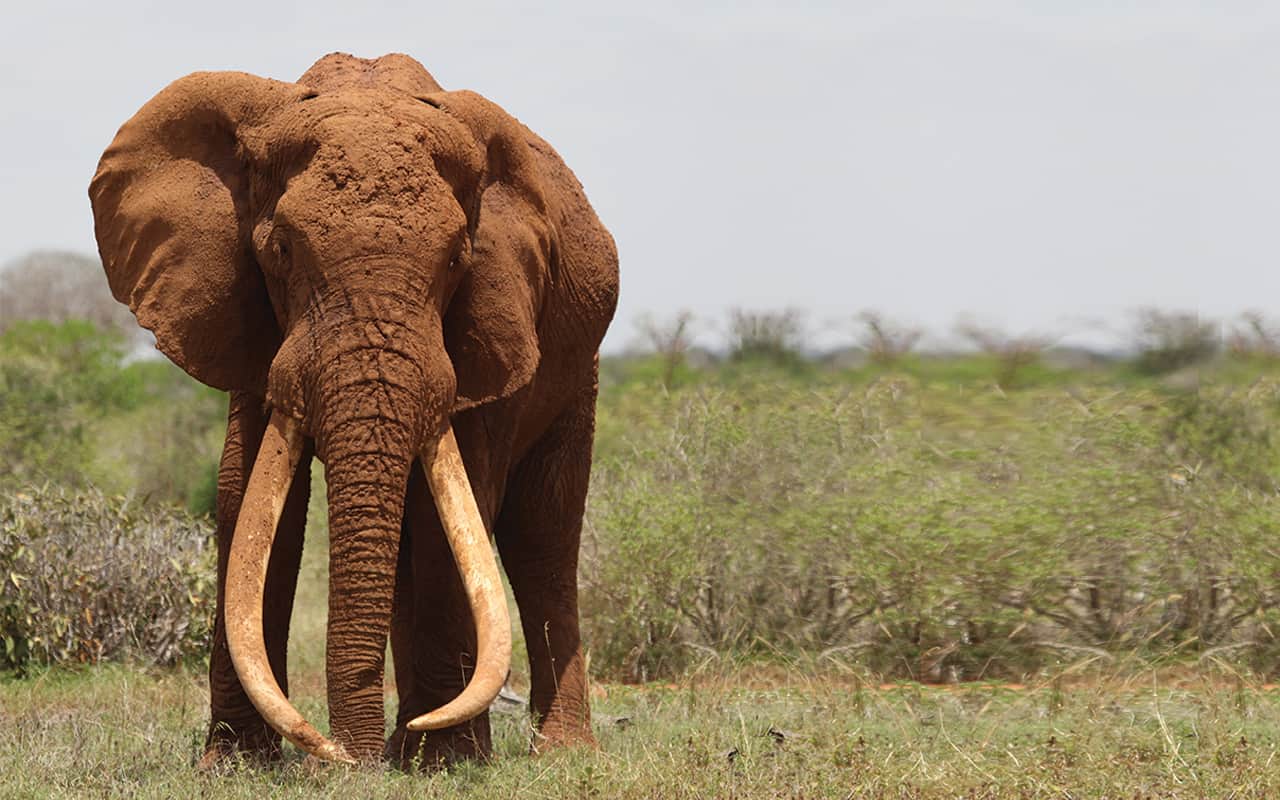 On May 30th, 2014, Satao, a big elephant super tusker in Kenya’s Tsavo East National Park, was found slaughtered by the poisoned arrow of an ivory poacher. Satao was one of the last of these great African male elephants who possess a genetic makeup that produces unusually large tusks. His were more than 7 feet long and almost reached the ground.

Satao was viewed with absolute awe because of the magnificence of his gentle presence. Estimated to be about 50 years of age, he carried himself with the majesty of a great leader, and his wisdom would have been acute after witnessing many droughts, and the slaughtering of his kin.

The poisoned arrow that killed Satao was strategically shot into his left flank, leaving him no chance of survival. The only body part his assailants wanted were his ivory tusks – so they were hacked off his face, and then furtively transported out to Asia so that someone could chop the tusks up into fatuous jewelry and mantelpiece trinkets.

Protecting the Last of the Super Tuskers

You may wonder why the Kenya Wildlife Service didn’t protect Satao. They did as well as they could. Together with the Tsavo Trust, a dedicated conservation organization, they jointly monitored his movements using aerial reconnaissance, and there were security personnel on the ground around his home range, combing the area for nefarious intruders. But with mounting poaching pressures, and anti-poaching resources stretched to the limit, it proved impossible to prevent the poachers slicing their way through the protective nets of an area that is almost 1000-square miles of Satao’s home range. The habitat Satao frequented was a densely-wooded area with few access roads, and that goes to show the determination of the professional poaching consortium who wanted him dead at all costs. Additionally, Satao’s carcass was found near the boundary of the National Park, and boundaries are always a hotspot because poachers can gain easier access to their target, and flee in haste. Satao had been seen a day before his death within 450 meters of the deadly spot.

The response to Satao’s death was swift. Kenya’s Wildlife Service (KWS) arrested the main poison dealer and supplier in Kilifi County, whose deadly product has been the cause of many painful and wasteful elephant deaths in Tsavo over the years.

Laws prohibiting ivory trading have been woefully inadequate in the 21st century. With 90% of Africa’s elephants killed in the 20th century, a global ivory ban was instituted in 1990. But the same international body that had enacted the ban – rescinded it in 2008 – allowing China to continue legally importing ivory.

Culpability Progress in the 21st Century

Laws prohibiting ivory trading have been woefully inadequate in the 21st century. With 90% of Africa’s elephants killed in the 20th century, a global ivory ban was instituted in 1990. But the same international body that had enacted the ban – rescinded it in 2008 – allowing China to continue legally importing ivory. It was a catastrophic reversal that is now counted in human and elephant carcasses.

In March 2017, Kenya lost another one of its last big elephant tuskers. Later that year, China came through on its 2015 promise with the USA to ban the legal sale of ivory into China. While this is undoubtedly a huge help to elephant conservation, China still hasn’t addressed its illegal ivory trade – and only when that is done – will there be a lasting impact. The leakage of ivory back into the illegal market is driven by the weak enforcement of wildlife protection laws.

China is not the only culprit. Ivory is about demand, poverty, ethnic rivalry, terrorism and civil war. Elephant blood lubricates the flow of human blood. Blood ivory has been helping to finance Al Qaeda’s Al Shabab wing, and Sudan’s notorious Janjaweed. As long as the commodity is valuable, it will be used to fund the ills of the world.

Breeding African elephants in zoos is not the answer. In the wild, African elephants thrive to 70 years old. In captivity, they seldom make it past 16 years because of the complexities of the unnatural existence, and the chronic health problems that emanate.

Tsavo Trust is a vital Kenyan non-profit conservation organization that recognizes the importance of a holistic approach to biodiversity conservation.

Professional wildlife conservation activities, grass-roots community engagement, valued partnerships and committed supporters combine to create a virtuous circle for the protection of Tsavo’s wilderness. The Big Tusker Project forms very much a part of the Trust’s work in Tsavo.