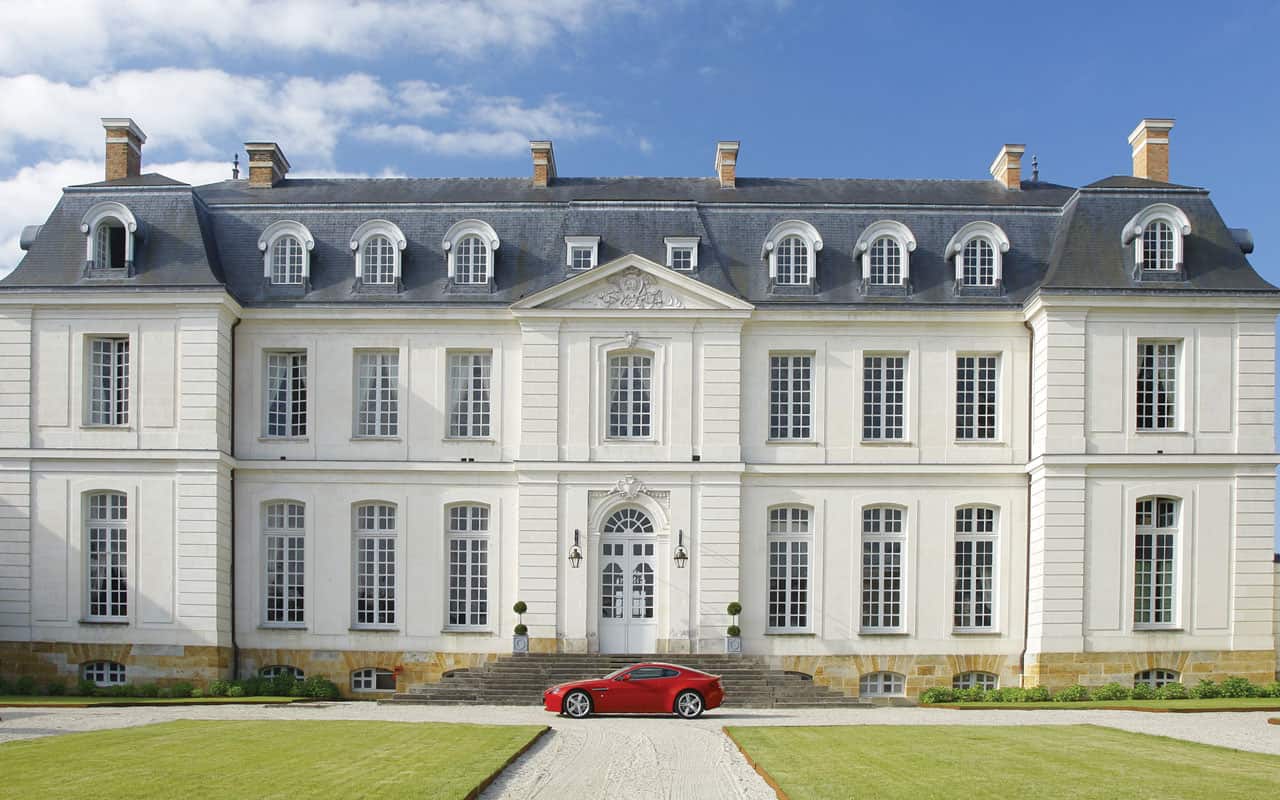 A Lap and Luxury

Following Le Mans veteran Oliver Mathai, in the Aston Martin V-12 DBS, through the Ford chicanes in Aston’s 2009 V-8 Vantage; cornering hard—second gear—very tight. How do the LMP cars do this? We have entered from a back corner of the paddock and it is a curious place to begin a lap. Full power up the long hill past the start line and the pits, all the way to top gear; two quick clicks down to fourth at the top of the hill and into the new Dunlop curves surrounded by acres of colorful gravel and quickly to the esses and the forest.

The old trees are nearly dead ahead as we clip the series of red and white apex curbs through still more gravel fields. The forest is cut so far back now that neither it nor the famous waddle walls are represented in these historic corners. The Vantage shift paddles are within an inch of the wheel and edged with a rubber grip. One finger does the trick and the changes are instantaneous and musical as the computer matches the revs in the sonorous new 4.7-liter V-8. Trying to corner quickly during the first mile in the car is a bit unnerving, but the grip in both the tires and the seat inspire a certain amount of new-century dynamic comfort.

Our first phase of comfort was older. Baron Jacques Pineau de Viennay, lord of Lucé commissioned his chateau Le Grand-Lucé in 1760, with completion in 1764 — our home away. The chateau’s entrée includes the ancient security system, crushed stone. As a visitor approaches up the long drive the sandstone gravel crunches the introduction with volume reaching a crescendo at the broad entry staircase. Our early morning departure to Le Circuit de La Sarthe reverses the volume at the chateau until it vanishes as we turn left out of the grand arch en route Le Mans; only 27 km to the next millennium.

A circuit safety car, an Audi RS4 wagon, is our guide and pacesetter. The Audi is hard away toward Tertre Rouge. Mathei’s DBS follows it closely. My Vantage was at full song and back up to fifth trying to stay close to the DBS. The ancient intersection at Tertre Rouge is hardly recognizable. It has become two very fast down hill 45-degree corners to set up for that legendary straight past Cafe l’Hunaudiere down to Mulsanne, presumably, to permit lap times to approach the circuit records established before all the new chicanes. Wind and tire sounds begin to grow as we pass 160 k/ph. The Vantage loves the wind. It is settling close to the road and feels locked on. I can feel the surface in the steering wheel, but it doesn’t really move, just offers confidence the tires will communicate clearly when they’re asked to work hard.

Larry Crane behind the wheel

Aston Martin’s second generation V8 Vantage benefited from 80 years of development for the 24 Hours of Le Mans and we chased its history on that storied circuit. 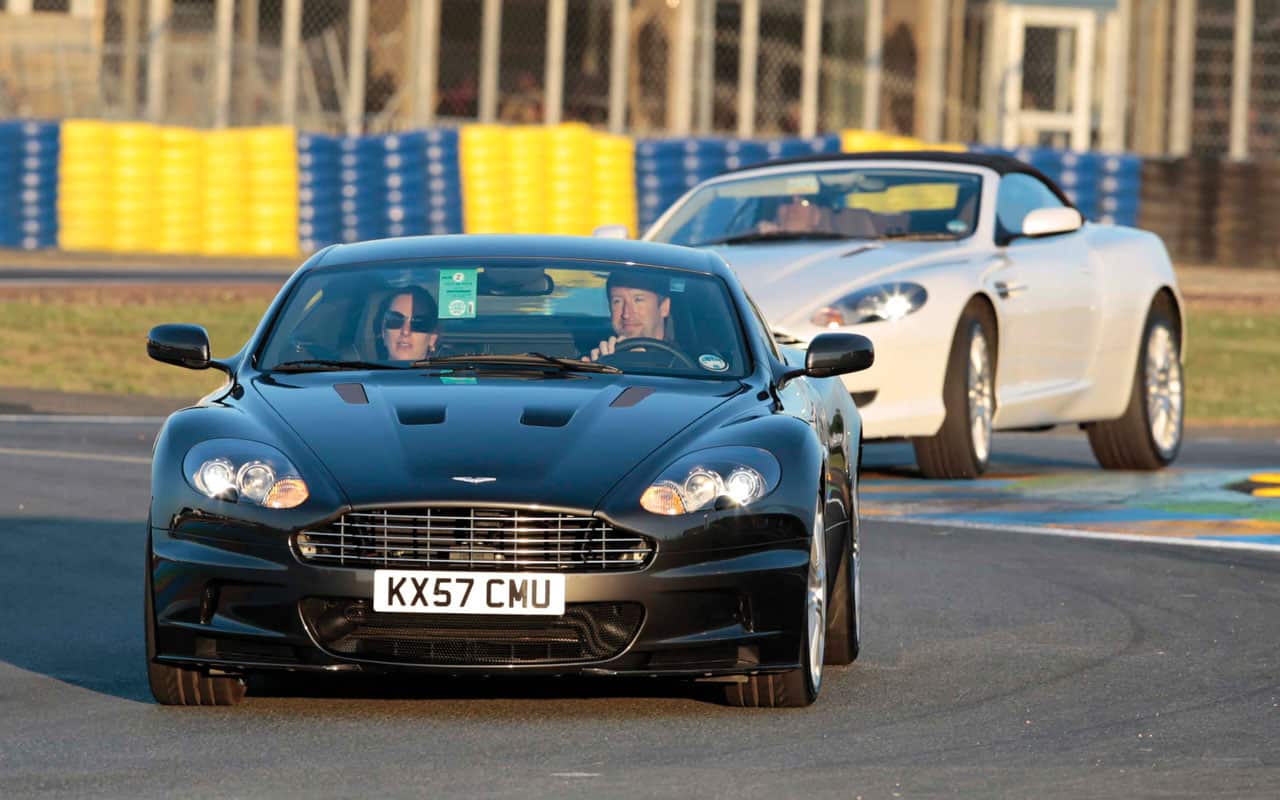 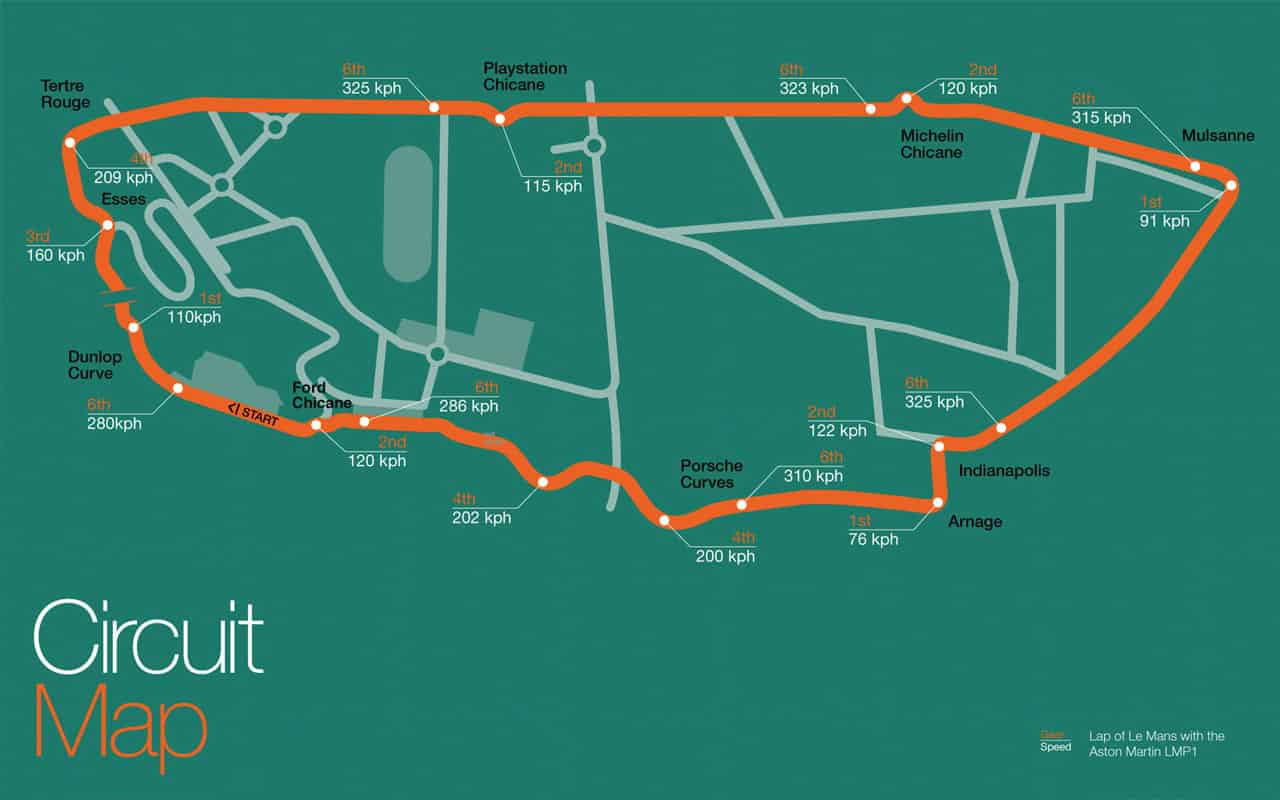 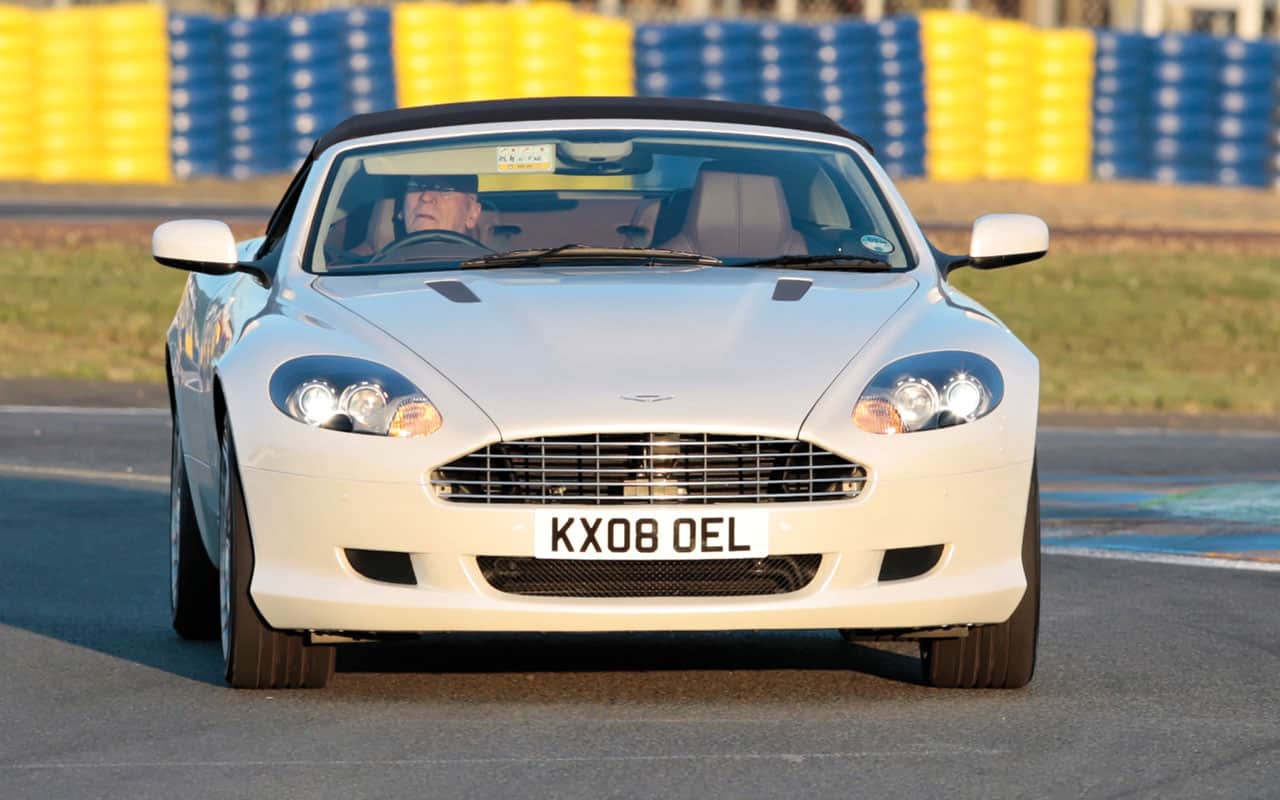 We are kept to a little above 220 k/ph. That is fast enough to challenge our approach to the first chicane. The Vantage 13.5/13-inch front/rear brake rotors have not changed for the new car and are all one could ask for this quick tour. The Audi and the DBS both do the chicane at the edge of the curbing. I follow by one car length using a bit more curb in search of a balance between the Vantage ability and mine.

The rest of our group began falling behind at the esses and are now too far back up the straight to see in my mirrors. Pressured by the DBS and one Vantage, our Audi guide ups the ante as we click back down to second gear and run through the second chicane in line astern. The entry is tight, but the exit opens into a fast sweep. Mathai is a real Le Mans veteran in a very fast car, but he is being constrained by the RS4 allowing me to stay with him. After the chicane, at our speed, the old Mulsanne kink is no challenge. A roundabout has replaced the intersection historically called Mulsanne corner. Now a smaller kink of race-only tarmac takes you 15-degrees right to avoid the traffic circle. With two quick down changes I have fourth gear quickly matching revs with musical accompaniment for each ratio. In conjunction with a long list of revisions, the Vantage torque curve has been raised across the rev range with the output between 3000 and 6500 up by 15%. Horsepower is up from 380 to 420 at 7000 rpm, but the torque has made the car feel far more responsive; even lighter. The last generation 4.3 Vantage was always fast, but never felt as light on its toes as this one.

The exit of the new Mulsanne turn is a full power sweep. The infamous sand bank is gone, with few complaints, I’ll wager. It is fun to follow the DBS V-12 back up to top gear. It’s a fast run to Arnage. There are a couple of long bends en route but not to be considered at our speed. Even so, at some point we will have to collect our non-racer colleagues who have no idea how to drive at even this 8/10 speed, but, hopefully, not until we can finish this delightful lap. A touch of brake is needed for the fast right kink that leads to the slightly-banked left traditionally known as Indianapolis. This historic corner is flat in third and wider than I expected, but the right at Arnage comes up quickly and is a narrow right turn at a rural intersection that requires a busy paddle, all the way down to first for a few seconds or low revs in second.

By the time we exit Arnage and make the sixth gear blast past old Maison Blanche (unfortunately, the cottage is no longer visible from the race-only tarmac through the Porsche Curves), the curves are fast and fun for us, but probably taken much more seriously by the racers in traffic. In my mirror I see a red Vantage closing fast. It is senior journalist Paul Dean who was caught behind the beginners for the first half lap. On the run down to Mulsanne, he later told me, he just couldn’t stand it any longer and blasted past everyone. Now we are four. 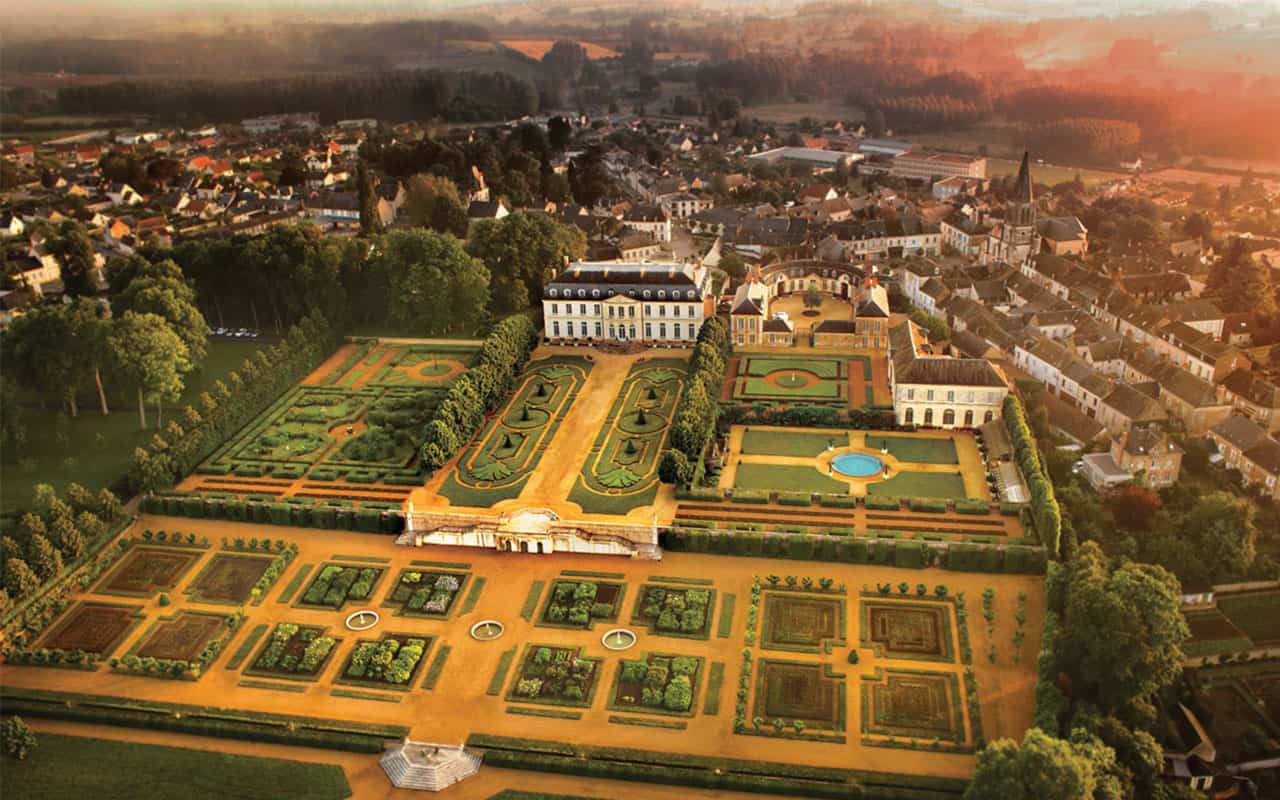 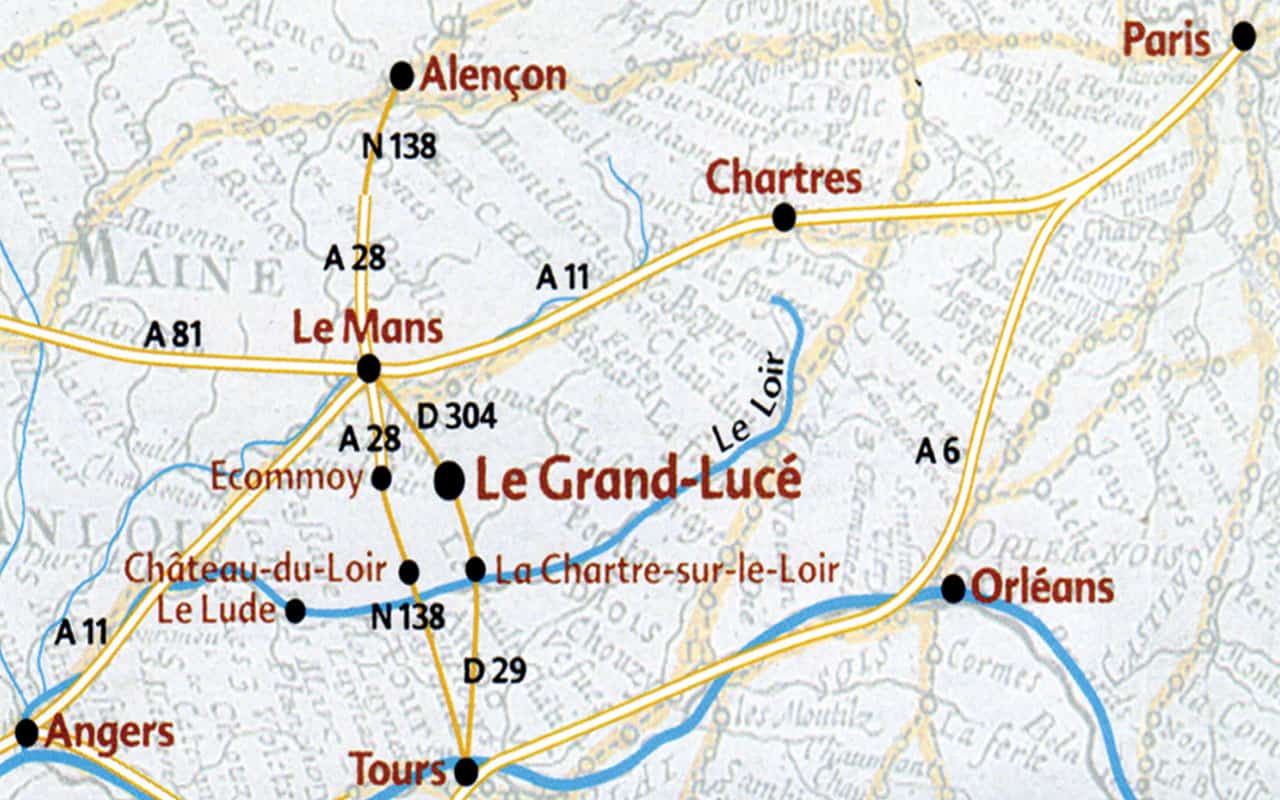 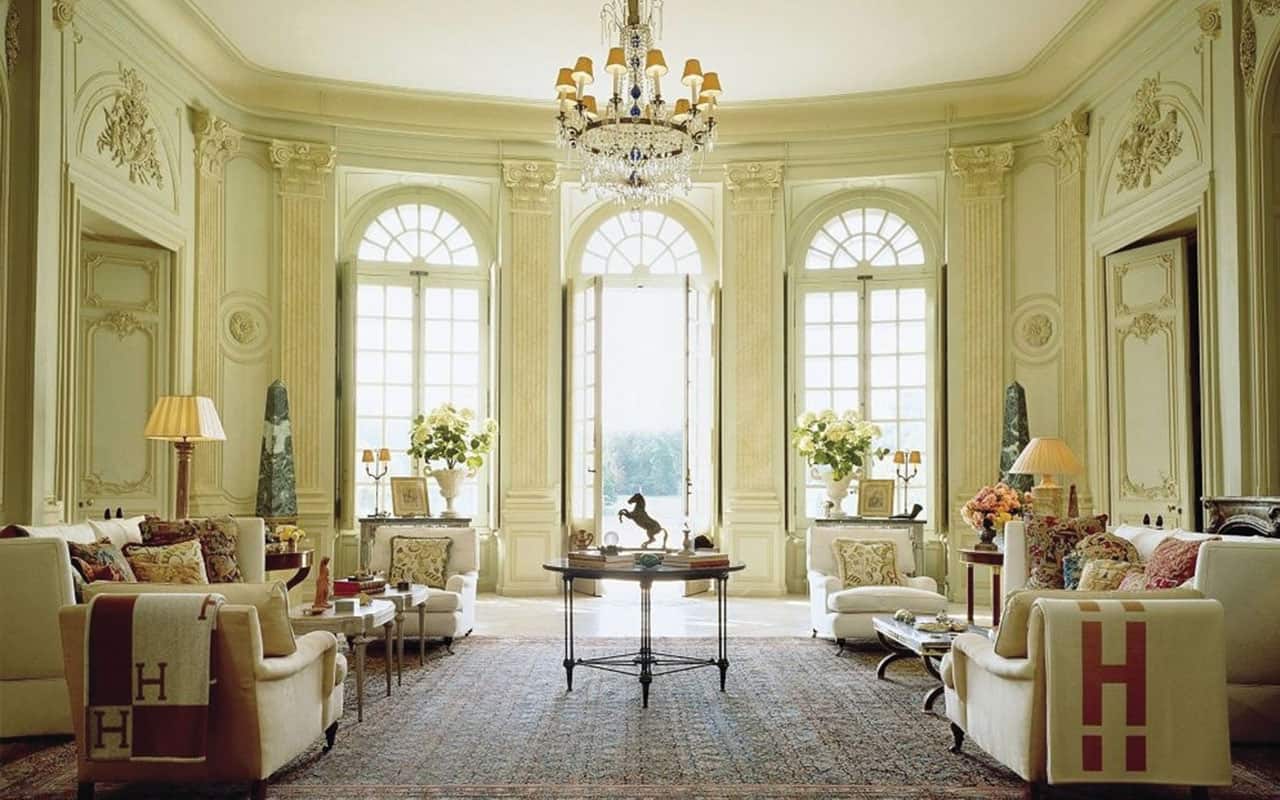 We brake hard for the Ford chicanes and pitch in. The new aluminum Bilsteins are seriously challenged in these tight combinations. Roll stiffness is better and it makes the car feel quicker to respond and I can hang the front tires from curb to curb with all four corners attached. These look like slow corners, but the Vantage passes over the curbs quickly and stays with the DBS. After watching practice here the night before, I recognize my amateur status; fast, modern cars do these kinks very quickly. Our lead all-wheel-drive RS4 is impressive here with enough power to make full use of its grip and pull us out of the last turn and up the straight past the start finish. Following the DBS at full song is fantastic. Up the long hill it pulls a few car lengths on the Vantage, but that just lets me hear the big V-12 reverberating between the walls fronting the stands. Before we get to the top and into the Dunlop Curve, the Audi lifts and pulls us down to wait for our colleagues.

With only one lap completed I consider what great working space is offered in Aston’s smallest coupe. My elbows never came in contact with anything. The newly trimmed console is close enough to reach everything easily and low enough to be out of the way on a busy afternoon drive. Even the foot well is roomy. So many modern cars have fender intrusions that cramp the working space for a good-sized shoe. Not here. There is a good dead pedal and a comfortable distance between the brake and accelerator that precludes any accidental pressing of one or the other when your foot needs to do something quickly. I will soon spend some time in a manual gearbox roadster and enjoy the space even with a clutch included, but with only two pedals it’s like a walk in the park.

Our “home away” in the Loir Valley satisfies that, too. Having announced our arrival on the gravel, we arrive at the central entry. From the open door we can see through the Court of Honor out the back door into the French formal terraces and down to the unseen squares of the “garden basket.” When we return to the chateau, we discover a small table prepared for supper in the informal dining room. The vast adjoining kitchen can prepare for great gatherings. For us the staff has prepared a spread of local fare on its central island from which to make personal selections. Included are some of the best wines from a variety of Loire chateaux. As the violet evening light softens the terraces we return for that “walk in the park.”

For 2020 Aston Martin offers the DB11 with optional power: the sonorous Aston Martin twin-turbo V-12 with 600 hp (0-60 in 3.9 sec and 200 mph), or an AMG twin-turbo V-8 from Aston’s new partnership with Daimler Benz (0-60 in 4.0 sec and 187 mph). The DB11 Roadster is only available with the AMG V-8. Make your choice, pick it up at the factory in Gaydon, Warwick, UK cross the Channel and head for the Loire Valley for a new favorite chateau (they will know where to find the best Loire wines) — and Le Mans is the third weekend in June. Ship your car home full of memories. The pilgrimage.