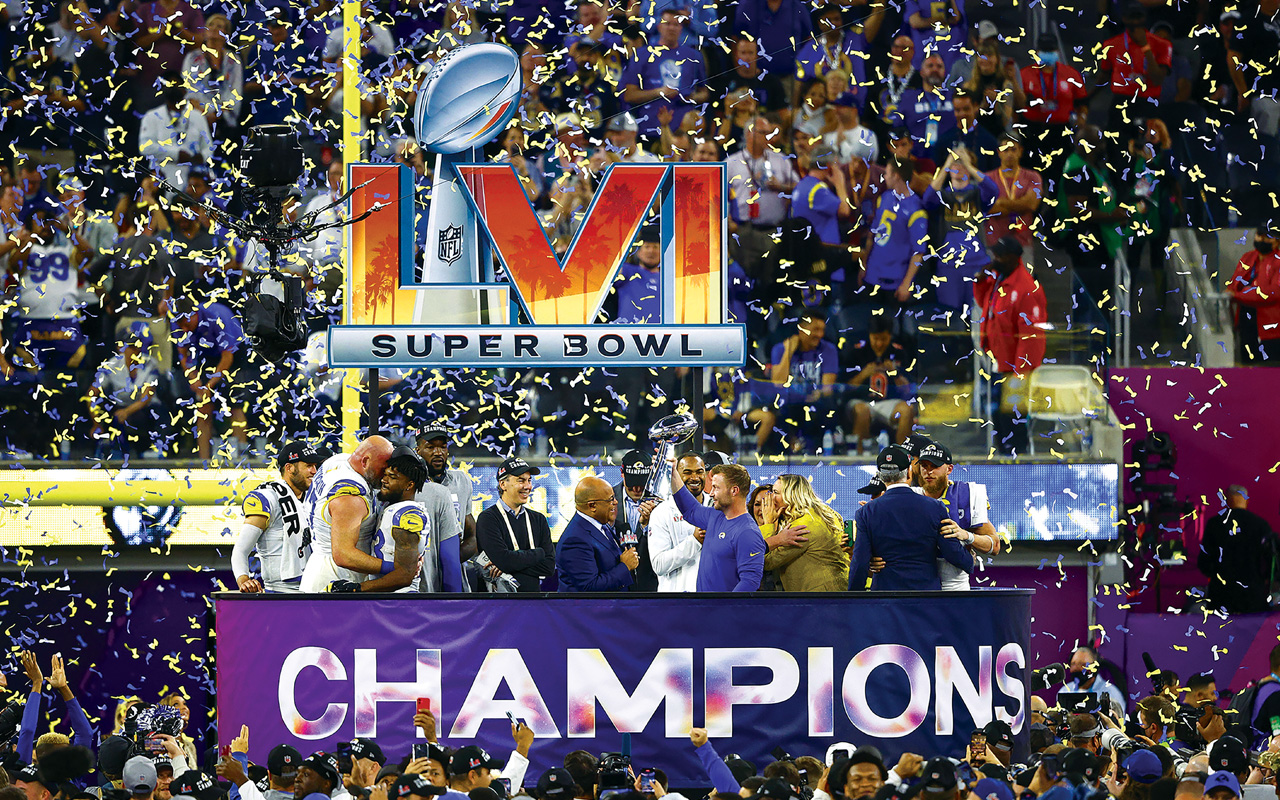 The L.A. Rams’ success is built from vital ingredients that have produced a football symphony. People and forces have aligned in the last five years to create a unique recipe that has produced heart-pumping action on the field. It’s been thrilling for a city that responds so well to the uplifting elements of sports brilliance. In the last five years, the Rams have provided us with five winning records, four playoff teams, three NFC titles, and two Super Bowl finals.

Sean McVay, the youngest NFL head coach in history, is a passionate, dynamic risk taker with immense visionary skills. He was better prepared this Super Bowl LVI – having had the experience from the previous one – and that gave him the ability to make the crucial adjustments that were needed throughout this high-pressure game.

Our own Lake Sherwood resident, Andrew Whitworth, tells the story of receiving a welcoming voice message from McVay in 2017. Whitworth describes it as a phone call that had destiny written all over it, and McVay’s acquisition of him was a stroke of genius. He knew how critical the left tackle position is in football, but more importantly, he knew that Whitworth would be a leader in the locker room. As it turns out, Whitworth became a huge community leader, and his impact resulted in his winning the Walter Payton NFL Man of the Year Award.

At virtually the same time, McVay brought in USC luminary Robert Woods, a massively talented receiver who would go on to thrive under McVay’s earnest direction. In the same year, McVay was astute enough to see the burgeoning talent in young college player Cooper Kupp, and he whisked him out of Eastern Washington in the third round of the 2017 NFL draft. Kupp and Woods formed an immediate and powerful bond, and the Rams’ rock-solid bedrock was cemented. McVay had a dynamic duo who disrupted their opponents’ strategy of trying to double team Kupp or Woods. Doing that freed up the other receiver – who was equally as strong as the one they were double teaming.

Andrew Whitworth, Robert Woods, Cooper Kupp and Aaron Donald showed the world the power of complementary chemistry, and their combined efforts were augmented by Jalen Ramsey who exceled as a shut-down cornerback. It produced football beauty. Sublimely brilliant play wrought from talent and chemistry – thrilled us. There was no question about the reliability and dependability of the fab four – Whitworth, Woods, Kupp and Donald – and Ramsey played an equally important role. 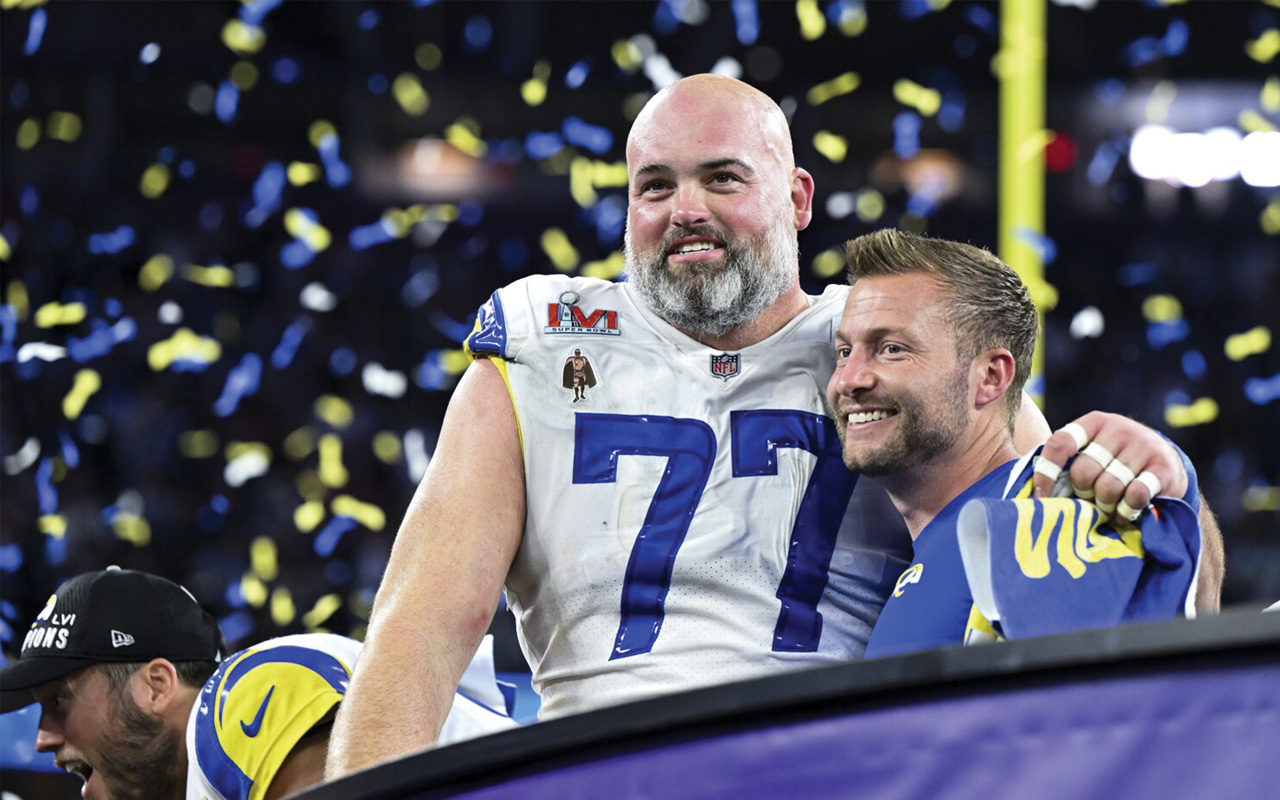 But fate deals cruel blows. Robert Woods was struck by a season-ending torn ACL injury at the end of 2021 – and there was mourning in the Rams’ camp. Woods’ contributions to their successes were vast and the loss of his talents presented uncertainty. As fate would have it, Odell Beckham Jr., dropped into McVay’s lap at the most opportune time. His arrival filled the giant void that Woods’ departure left. OBJ has turned out to be a key ingredient to the passing game.

There was one more problem that needed to be fixed. Only a year earlier, in 2020, the rift between the Rams’ quarterback, Jared Goff, and Sean McVay, was no longer a team secret. McVay began to publicly air his dissatisfaction with Goff’s play in the hopes that it would motivate him to play better. Unfortunately, that tactic didn’t work. In week 12 of the 2020 season, when Goff had turned the ball over three times in a 23-20 loss to the NFC West rival, San Francisco 49ers, McVay said,

“Our quarterback has to take better care of the football.”

McVay’s frustration with Goff had been brewing for some time, and the shouting matches between the two men became common occurrences. There’s no question that they were diametrically opposite temperaments. McVay was passionately emotional and sharply focused on results while Goff appeared to be laid back and mellow. It was Goff’s thumb injury that gave McVay the reasoning he needed to trade a quarterback in whom he’d lost faith.

The story of how Lions’ quarterback Matthew Stafford came to be traded to the Rams all began at a Cabo San Lucas Resort in Mexico just over a year ago. It turns out that McVay and Stafford were at the same resort in a spa when the conversation about Stafford’s professional football career surfaced. McVay wanted to make changes and he recognized Stafford’s talents and needs. With the support of General Manager Les Snead and owner, Stan Kroenke, the dream deal looked almost impossible to pull off – so complex was the acquisition. Nevertheless, McVay knew that this was his missing crown jewel and he wanted Stafford really badly.

At the end of January 2021, the Rams and the Lions agreed on a trade that would send Jared Goff to Detroit and Matthew Stafford to Los Angeles. It involved huge chunks of money in that Goff was still on a $134 million four-year contract extension (signed in 2019) with the Rams, and at the time of the trade, Goff still had $43 million in guaranteed money remaining on his contract. The sacrifice to the Rams bank account was $24.7 million in dead money. The stakes were high. 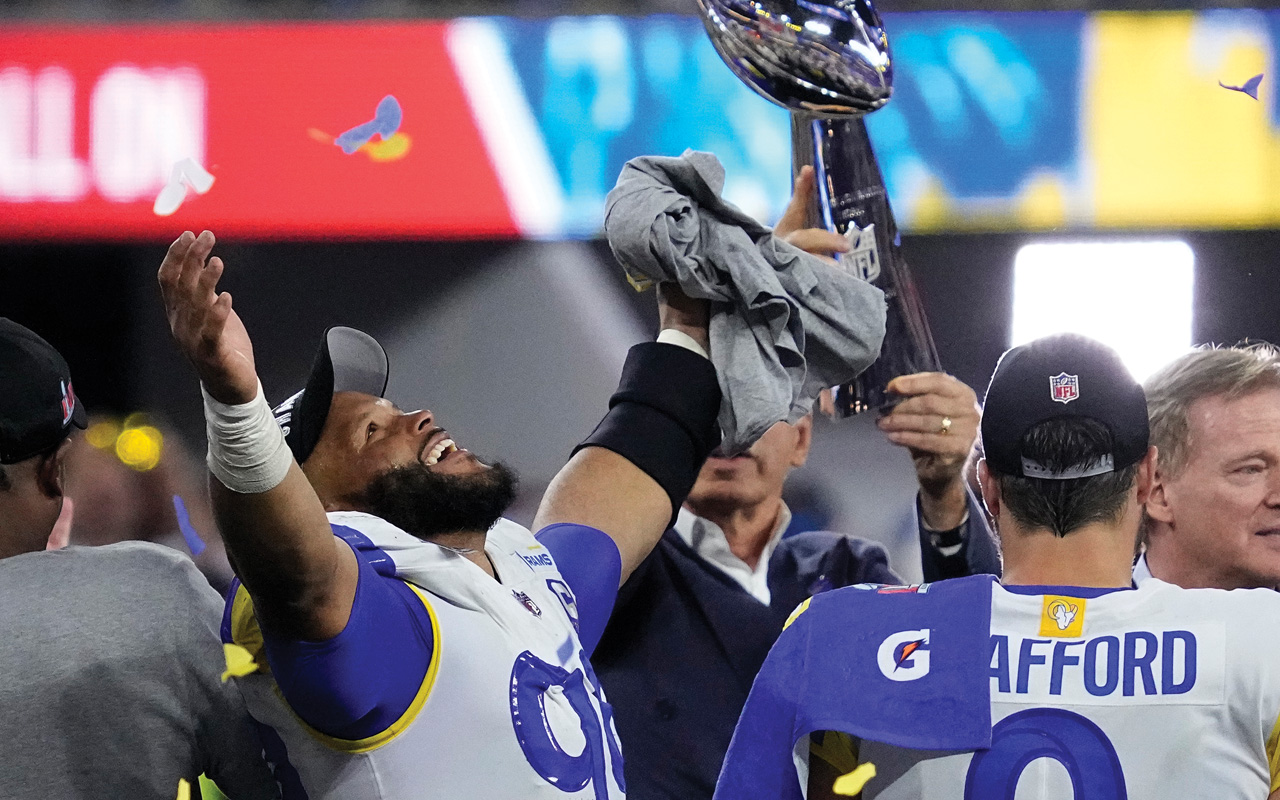 Equally at stake was the prognosis on Stafford’s performance. He was 33 years old and during his 12 years with the Lions, Detroit had a winning record only four times and reached the playoffs only three times. At the time of the trade, Stafford had ended the season ranked 17th all-time in passing yards with 45,109 and 16th all-time in passing touchdowns. There was never any question about his talent, but players like Stafford needed the challenge of a Super Bowl to show their explosive potential. He needed the big stage, and Detroit was not going to provide him with that opportunity. By the end of the 2020 season, Stafford made it clear that he wanted to go elsewhere, and explained to the Detroit Free Press:

“I’ve always wanted to play in those big games. I feel like I will excel in those situations. I want to shoot my shot.”

The story of how Stafford joined the L.A. Rams and helped lead them to Super Bowl LVI in his first season with the team is an epic tale. At the January 2022 game in which they beat the 49ers on home turf – making it to the Super Bowl final – Stafford’s emotions spilled over:

“It’s crazy,” Stafford said in a hallway outside the Rams’ locker room. “I mean, crazy. It’s a story (the meeting in Mexico) that, to this day, I feel like a lot of people still can’t believe. I never thought that was ever gonna happen, not in a hundred years.”

Instead, the Rams’ new quarterback did it in a couple of hundred days. A few months back, many people could not have envisioned a Bengals-Rams Super Bowl final – particularly after Woods’ career-ending injury. With a solid bedrock of established great players, Stafford walked into a dream team – and despite the significant loss of Robert Woods – the men’s collective efforts superseded all odds.

It turns out that Sean McVay’s vision was accurate. He gambled and won on a quarterback whose potential needed the right stage and the right teammates. Knowing that the most important position in the whole of sports is the NFL quarterback, McVay was right to take on the massive gambol. It paid off.

At Super Bowl LVI, the Rams got off to a promising start – leading early in the first quarter with a touchdown by Odell Beckham Jr. By half time they were convincingly in control until the catastrophe of Beckham’s game-ending knee injury. Despite the indefatigable defense efforts of Aaron Donald and Von Miller, it was touch and go until the fourth quarter when Cooper Kupp ended a 15-play, 79-yard drive with a 1-yard touchdown to take a 23-20 lead over the Cincinnati Bengals.

The victory made the Rams the second team in NFL history to win a Vince Lombardi Trophy in their home stadium, and by winning inside SoFi Stadium, Los Angeles captured the second Super Bowl in franchise history. Even the half-time show was a brilliantly refreshing reminder of the entertainment capital’s musical powerhouses.

The Rams’ win represented so much more for Los Angelinos. On February 13, 2022, we were all shown the depth and breadth of talent in one of the world’s greatest cities. 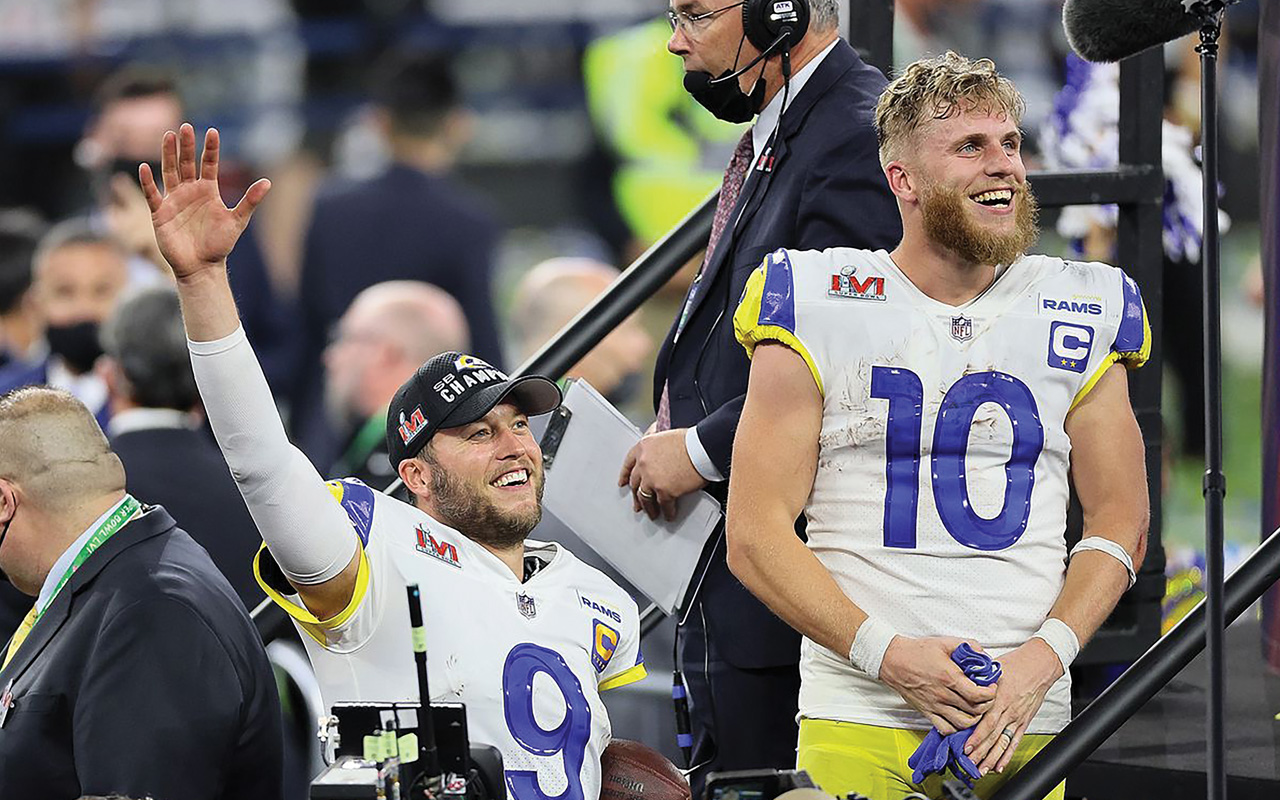