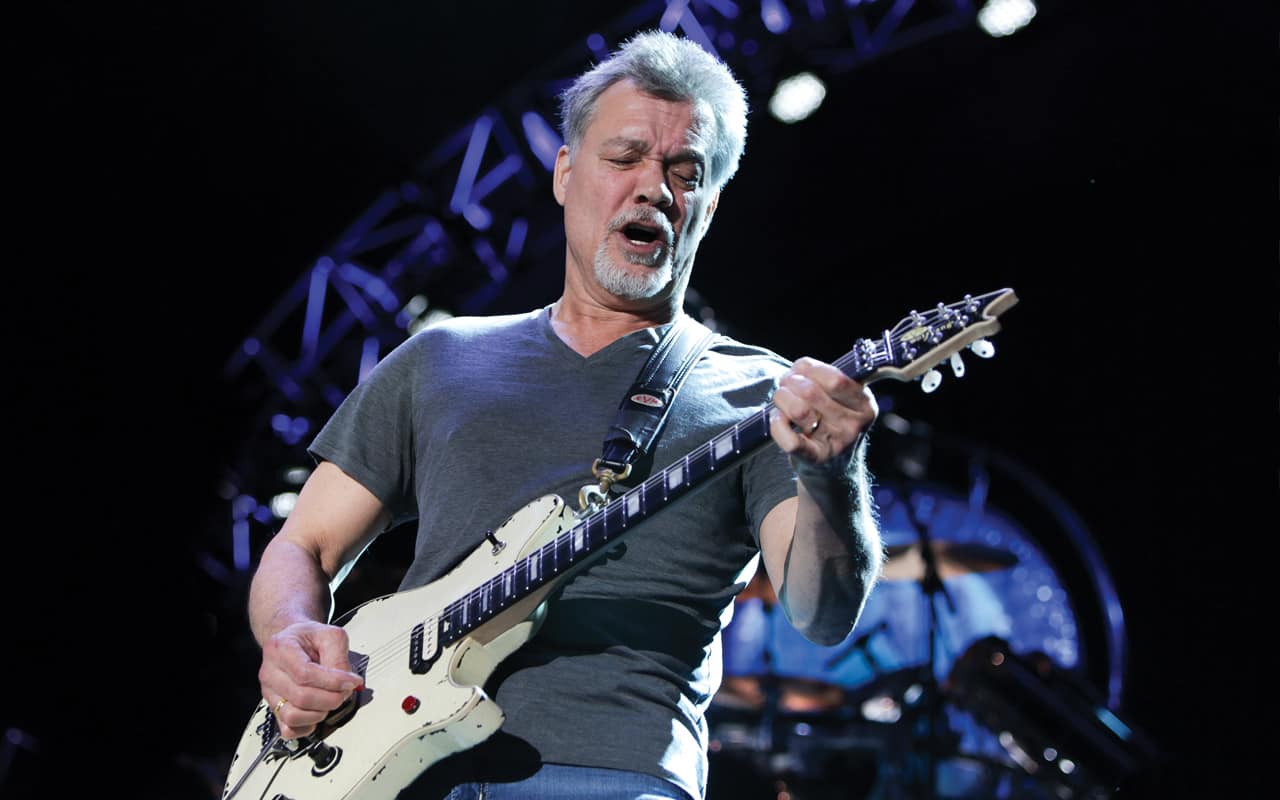 2020 took its toll. In amongst the carnage, we lost the Mozart of Rock Guitar, Eddie Van Halen, who was the innovative rock god of Van Halen.

Musicality on that scale cannot be taught or bought. It’s innate. Brothers Eddie and Alex Van Halen were born in Holland to an Indonesian mother and a Dutch father who was a classically trained clarinet and saxophone player. Music coursed through the family’s veins, so the Van Halen parents signed up Eddie and Alex for classical piano lessons.

The brothers’ debut into live performances began on the boat ride from Holland to the USA. The Van Halen parents had decided that the USA was the right place for their burgeoning talent, so Jan Van Halen paid for the family’s voyage from Holland by serenading the ship’s passengers, and Eddie and Alex played the piano during intermissions. They landed in Pasadena, California – and confronted the hardships that most immigrants to the USA encounter. Eddie’s dad worked as a janitor while his mom became a maid. They lived in one room and necessity became the mother of invention. Jan Van Halen needed to supplement his family’s income by playing music at gigs on the weekends – and that extra income saved the family financially. Eddie and Alex continued to take piano lessons while their mom entered them into piano contests. Despite not being able to read music, Eddie came first in competitions three years in a row because he could imitate and replicate pitch-perfect sounds without any formal direction. That kind of talent is genetic gold.

Jan, Eddie and Alex were soon jamming and composing their own music. While Alex played the drums, Eddie took up the bass guitar, and the brothers soon realized that they could make their music as loud as they wanted.

Eddie vividly recalls the succession of events: “We discovered the Beatles, and knew we wanted to do Rock ‘n’ Roll, so we quit the piano; Alex took up the drums, and I began experimenting on the guitar. We were clearly taking a risk by going into Rock ‘n’ Roll because Disco and Punk were dominating the charts in the late 70’s.” Persistence and perseverance paid off as the brothers put flyers into lockers at school; they did backyard gigs, and went straight to the people with their original sound. It ignited legions of young people who felt more alive than they’d ever felt with Van Halen’s powerful, rhythmic pulse.

In 1978, Val Halen’s self-titled debut album hit the stores and turned the music industry on its head. Eddie showed off his astonishing skills in the song, “Eruption,” a furious 1:42-minute guitar solo. The album also contained a cover of the Kinks’ “You Really Got Me” and “Ain’t Talkin’ ‘Bout Love.” Mike McCready of Pearl Jam told Rolling Stone magazine that listening to Van Halen’s “Eruption” was like hearing Mozart for the first time. “He gets sounds that aren’t necessarily guitar sounds – a lot of harmonics, textures that happen just because of how he picks.”

Van Halen became the soundtrack for an entire generation, and Eddie viewed that distinction as an honor. They knocked Disco off the charts in the late 1970s with their self-titled debut album, and then, with their “1984” mega hit record with classics such as “Jump”, “Panama” and “Hot for Teacher.”

Eddie pushed the limits beyond anything that anybody else was doing. He played the guitar with both his right and left hands on the fretboard. He pinged out harmonics everywhere, and developed new techniques that had stadium crowds roaring for more. Eddie loved powerful sounds and even put the roar of his Lamborghini engine on their “Panama” recording.

Van Halen became the soundtrack for an entire generation, and Eddie viewed that distinction as an honor. They knocked Disco off the charts in the late 1970s with their self-titled debut album, and then, with their “1984” mega hit record with classics such as “Jump”, “Panama” and “Hot for Teacher.”

Eddie relished the fact that he’d been able to make music with his brother, Alex, and his son, Wolfgang, who joined the band in 2006. He wrote, played, innovated. He epitomized the American Dream, and took his talent to unimaginable places. This guitar virtuoso played with blinding speed, control, and mind-bending innovation. Few people know that he played the unmistakably fiery solo in Michael Jackson’s hit, “Beat It.”

Jon Bon Jovi said of the rock icon: “Any kid who ever looked at the electric guitar had to think of Eddie Van Halen. He was an innovator, a genuine, unique soul, and there’s a huge void there now forever. We were lucky to have had him. He was an incredible talent.”

Van Halen is among the top 20 best-selling artists of all time, and their induction into the Rock and Roll Hall of Fame in 2007 cemented their place in world history. Rolling Stone magazine put Eddie Van Halen at No.8 in its list of the 100 greatest guitarists.

When asked in a recent interview with whom he would most like to jam again, Eddie replied without hesitation, “my dad.” This legendary musician did what he loved his entire life, and left behind a distinctive rock ‘n’ roll sound that will live on for perpetuity.

We sure hope that he is jamming with his dad now.

Acknowledgements: Interview: “What It Means to be American” WIMTBA.National Museum of American History. ABC7ny.com

Diana Addison Lyle previously worked as an English High School teacher in South Africa at a top boys’ school for 13 years. She holds a post-graduate bachelor’s degree in English and has had substantial experience writing for magazines world-wide including Marie Clare Magazine. She has also done extensive copy-writing for cutting-edge advertising agencies. Her global life has given her an international perspective that translates into intelligent, objective journalism.

FEEDBACK
To send a letter to the editor or comments and/or ideas for the magazine or website, email our Editor-In-Chief: di.lyle@sbcglobal.net

BACK ISSUES
To find an article or back issue, please visit our extensive past issues library here: https://wmlifestyle.com/past-issues/