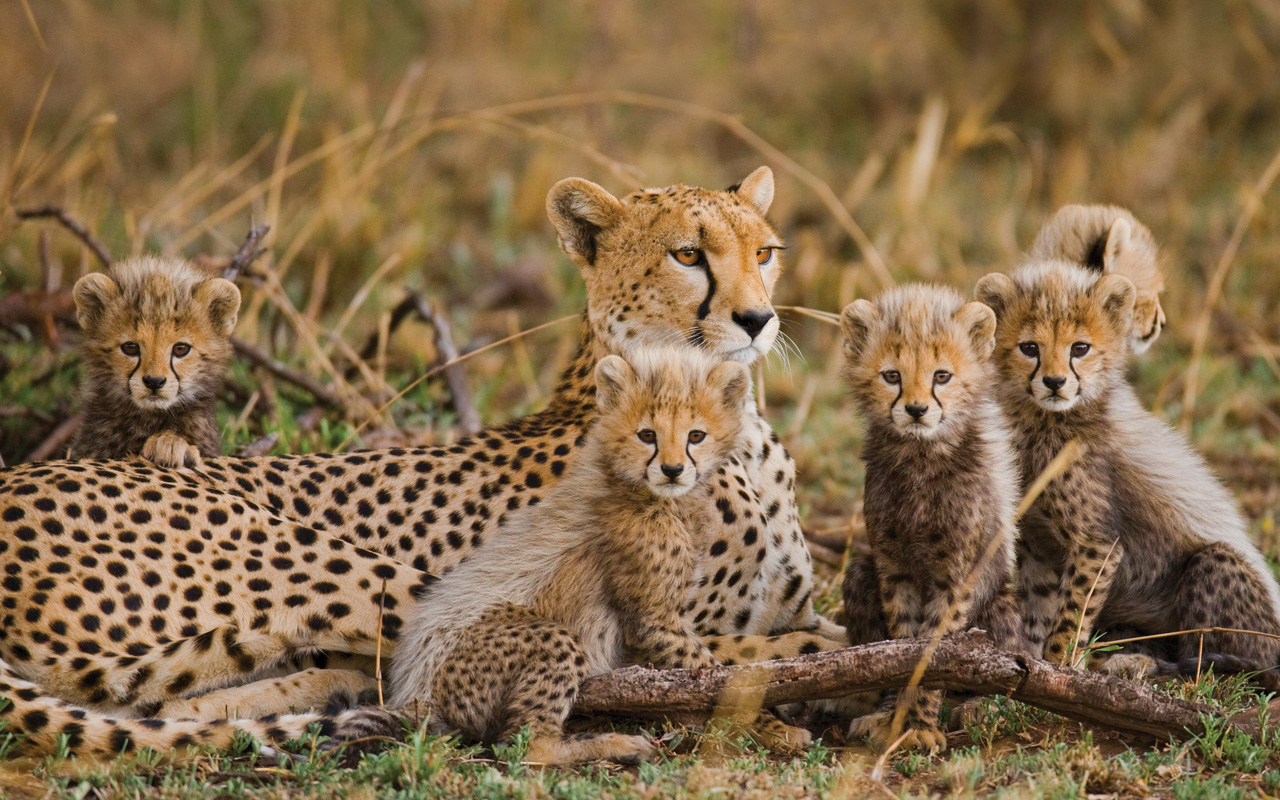 The magnificent cheetah is the fastest land animal on the planet – achieving speeds of up to 70 mph. They can accelerate from 0 to 60 mph per hour in three seconds, making them faster than most sports cars. Cheetahs use their acceleration and speed to chase down and catch prey, like gazelles, on the sub-Saharan savannas of Africa. They have small heads, lean bodies, long legs, and a yellowish-tan coat with distinctive black spots. Their legs are proportionally longer than those of other big cats; an elongated spine increases stride length at high speeds; they have unretractable claws, special paw pads for extra traction, and a long tail for balance.

Today, cheetahs are found in the wild in several locations in Africa, while a tiny population of another subspecies, the Asiatic cheetah, is found in Iran. Through careful collaring and studying, scientists estimate that only 6,674 African cheetahs are living in the wild, and there may be fewer than 50 Asian cheetahs left in the world. Cheetahs are facing different threats that are collectively pushing them toward extinction.

Humans are the primary threat to the cheetah population. Not only are they eradicating the cheetah’s vast habitats for farming, mining and commercial use but African farmers routinely shoot, poison or trap cheetahs to prevent them from getting to their cattle, sheep and goats.

Human hunters also view the cheetah as a prized trophy animal. Their beauty and their distinction as the fastest earth animal make them highly desirable targets for hunters who will pay large sums of money for the bragging rights of having taken down one of these rare, exotic animals.

Cheetahs are so beautiful that they are also sold into the exotic-pet trade, and worse still, they are butchered for cheetah parts that are trafficked to Asia.

Human-caused climate change is also significantly affecting the cheetah’s chances of survival. These sensitive and anxiety-prone cats roam the dwindling open, dry grasslands of Sub-Saharan Africa with a short lifespan of 10-15 years. Beyond human threats, cheetah are often killed by other animals – namely lions, leopards and hyenas.

With so few cheetahs left in the world, the problem of genetic diversity exists, and inbreeding creates its own set of problems for the species. New bloodlines help to augment the strength of the gene pool but with so few members of the species left, bloodline diversity becomes exceptionally challenging.

King Cheetahs are exactly like regular cheetahs except for mutations in their fur patterns. Instead of having small black dots all over their bodies, they have large, dark splotches in irregular patterns. They also have three distinct black stripes going down their backs in vertical lines. Injecting their gene pool into the species is highly desirable but with only as few as 10 left in the wild, the chances of a regular cheetah female mating with a King Cheetah is very rare.

Cheetahs are also highly sensitive animals. They lack the bravado of lions and they are socially shy – avoiding contact with other cheetahs. This makes them extremely awkward when it comes to mating – an activity that causes them great stress. Even when a female does become pregnant and her cubs are born, only 5% of cheetah cubs will make it to adulthood. Lions, leopards and hyenas prey upon cheetah cubs – taking them out of the food chain before they reach adulthood when they are too fast to catch. When the cubs are 6 months old, the mother begins teaching them how to hunt and avoid predators, and she leaves them when they are about 18 months old.

Scientific organizations that rely on public funding assist African governments and communities to protect the natural systems critical to saving the cheetah population. They secure valuable flows of ecosystems services and local livelihoods based on principles of social and environmental sustainability. They use local and global influence to combat wildlife poaching and trafficking across transit routes. It’s imperative that they partner with indigenous communities – giving them a valuable stake in the preservation of the species. They also work tirelessly to investigate and combat diseases that move between people, wildlife and domestic animals – threatening the health of all.

Scientific organizations that rely on public funding assist African governments and communities to protect the natural systems critical to saving the cheetah population.