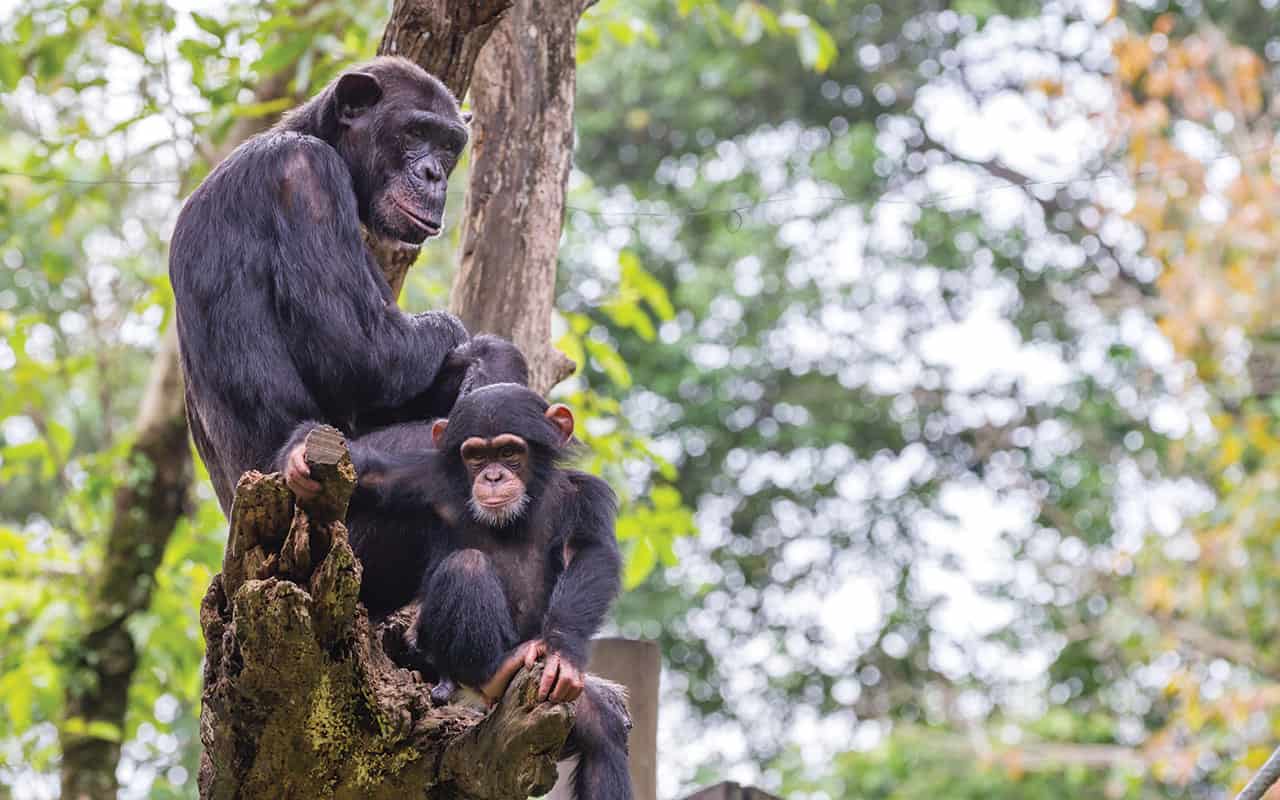 2020 has been a year of shock and reflection. Crises are not wasted if we – as a human race – emerge from them wiser, more humane, and resolved to change our behavior. Bringing exotic wild animals into wet blood markets in China and elsewhere in the world – has been a systemic recipe for disaster. Wild and domestic animals should never endure the harrowing conditions that we’ve imposed on them. The stress it induces in these terrified creatures compromises their immune systems – and diseases can and do cross over from animals into humans when we slaughter them mercilessly for our consumption.

Chimpanzees, Gorillas and Bonobos are the animals closest to us genetically. In 2020, the IUCN (World Conservation Union) forecasts that at our current rate of decimation, we stand to lose these African Great Apes completely in the wild. They are hanging on by a thread to the few equatorial tree branches we’ve allowed them to keep.

African apes are largely confined to the forests of Equatorial Africa as their last remaining stronghold. Chimpanzees are extinct in four of their 25 range countries – Gambia, Burkina Faso, Togo and Benin – because they’ve been extricated from their habitats, and slaughtered for human consumption. We’ve also burned down and cleared much of their pristine forest habitat for domestic farming, logging and mining. Where they numbered 1 million at the turn of the 20th century, today it’s estimated there are 172,000-300,000 chimpanzees remaining in the wild. Current trends indicate that African ape populations will decline by an additional 80 percent in the next 30-40 years. We have a generation and a half – possibly two – to alter the trend.

The commercial bushmeat and illegal exotic pet trades give poachers incentives to kill even nursing mothers. Infectious diseases such as Ebola Virus, to which great apes are inherently more vulnerable as their numbers decline, may become as serious a threat as we have seen. It’s harrowing to watch wild animals cramped into tiny cages at wet blood markets – awaiting the deaths that they know are coming. Veterinarians concur that the stress they endure in environments like that make them highly susceptible to disease.

Armed conflict often leads to environmental destruction. Africa’s wars are often in the heart of the great apes’ habitat, and as the soldiers move in with their automatic weapons, and slash and burn tactics, the great apes are confronted with death and heightened stress levels.

By working with conscientious community members, Dr. Goodall believes that she has a far better chance of holding law enforcement accountable to uphold the laws surrounding illegal wildlife trafficking.

Corruption and bribery supersede laws. Poor people are paid large sums of money to turn a blind eye to the protection laws for the animals. There are also political leaders who don’t enforce laws that should be applied, and in some cases, countries in Africa and Asia simply ignore the existent laws. Profit and greed have ways of sweeping aside laws and protections.

When a country concentrates on wealth acquisition for a few elite people – and when they ignore the staggering scale of poverty and disease amongst their people, the root of ape extinction has little chance of being addressed. When you combine human population growth with systemic poverty – where a person will eat anything to survive – there is no foundation for change.

Economic disparity and desperation, political cruelty where there is inhumane indifference to the suffering of people and animals, unchecked political corruption, conflict and wars, lack of education, and little community involvement in managing natural resources – all create a perfect storm for the extinction of species.

Dr. Jane Goodall is the world’s most highly regarded, tireless expert on great apes, particularly chimpanzees. She has adopted the “triangle approach” which relies on effective cooperation and interplay between three entities: environmental education programs, law enforcement, and sanctuaries. Her efforts to stop the trafficking of chimpanzees in Africa is a never-ending battle, but of all people, she has effected the greatest change. She says:

“This illegal practice often begins with a deadly hunt, during which several members of a chimpanzee group are killed by poachers, often for meat or to sell at market. The infants of the group are then sold into the pet trafficking trade, facing short, painful and lonely lives as exotic pets or ‘entertainers’”.

By working with conscientious community members, Dr. Goodall believes that she has a far better chance of holding law enforcement accountable to uphold the laws surrounding illegal wildlife trafficking. Once alerted to the presence of a pet chimpanzee in a village, law enforcement officials are then able to seize the chimpanzee from the owner, and charge the owner with a crime if one has been committed.