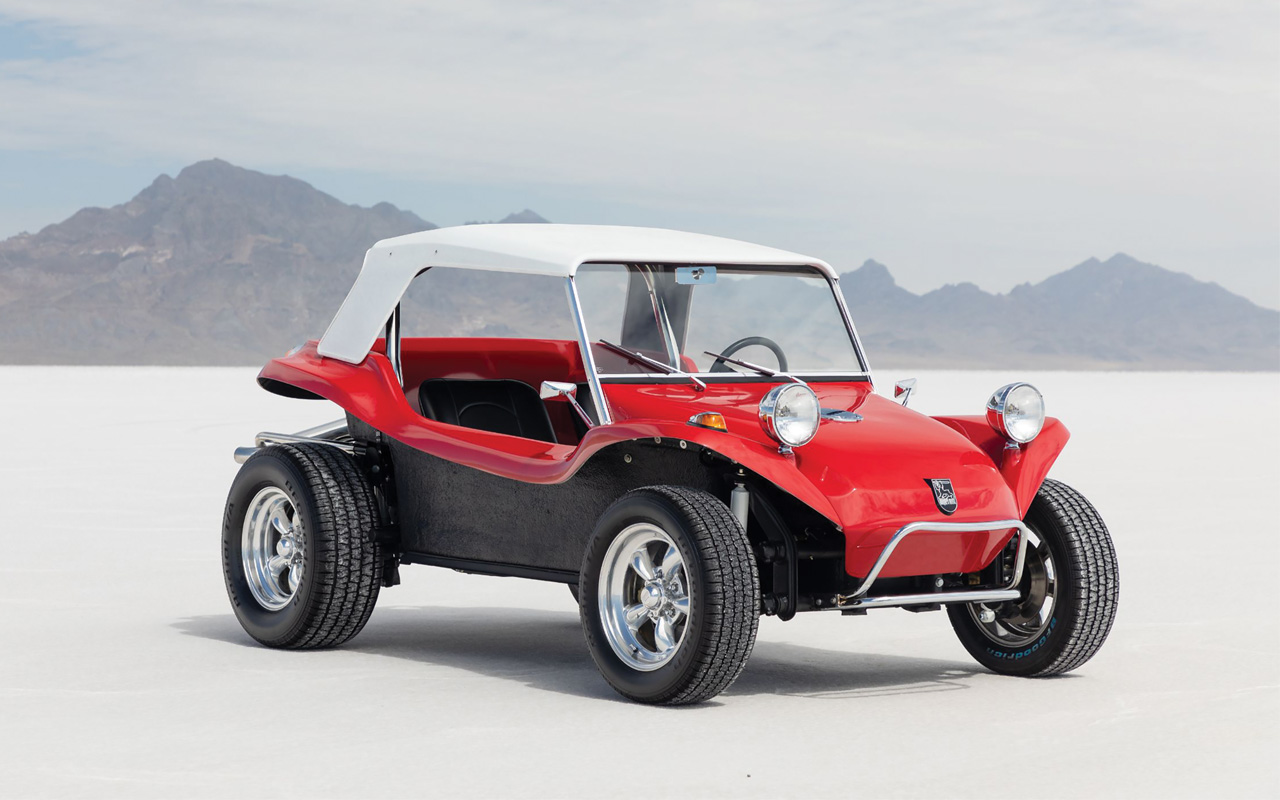 The background music for many of our lives in the 60s was written in Laurel Canyon. Several of the best bands that created it met at the cottage of the godmother of the talented musical denizens of that place, Cass Elliot of the popular group “The Mommas and the Pappas”. Her knowledge of all things popular in the new culture was underscored in a recent documentary titled “Laurel Canyon, A Place in Time”. A recurring element was photographer Henry Diltz’s footage over Cass’s shoulder while she negotiated the canyon road in her Meyers Manx — securing its “place in that time.”

“Dune” found its way into the postwar car-crazed culture and made soft wind-blown sand into entertainment. The topographic challenges inspired the creation of shortened Ford T-bucket hot rods that looked like baby buggies with over-inflated tires — “dune buggies” joined the lexicon.

In 1963 Bruce Meyers, a Merchant Marine and Navy veteran, and recent graduate of Chouinard Art Institute, just wanted a cool, unique, multi-purpose roadster. His other credential for his fiberglass icon was designing and constructing fiberglass hulls for fine yachts. Robust little Volkswagens were already being used for off-road adventuring. An air-cooled, rear-mounted engine on a simple pressed-steel four-wheel platform offered a base for possibilities — historically — remember the WWII Wehrmacht Kübelwagen (yep, “bucket car!”).

Meyers had a simple idea, a two-piece fiberglass bucket (the nose piece was separate) that included artful fenders, had no doors, and ended in a bobbed tail over its exposed engine. For the international motorsport fans, the Isle of Man represents motorcycle racing at its most exciting. The Manx (nickname for local inhabitants) TT races followed 31 miles of two-lane roads around the island winding between stone walls, through narrow villages and the most gifted riders could average speeds beyond 130 mph (top recorded speed is 206). The rest of the world only knew of the island for its unique breed of feline that did not include a tail. Meyers’ stubby buggy looked for all the world like a Manx cat. Its simplicity inspired dozens of copies soon flooding the just-for-fun dune buggy market and swamped the business Bruce and Winnie had worked so hard to create and nurture. 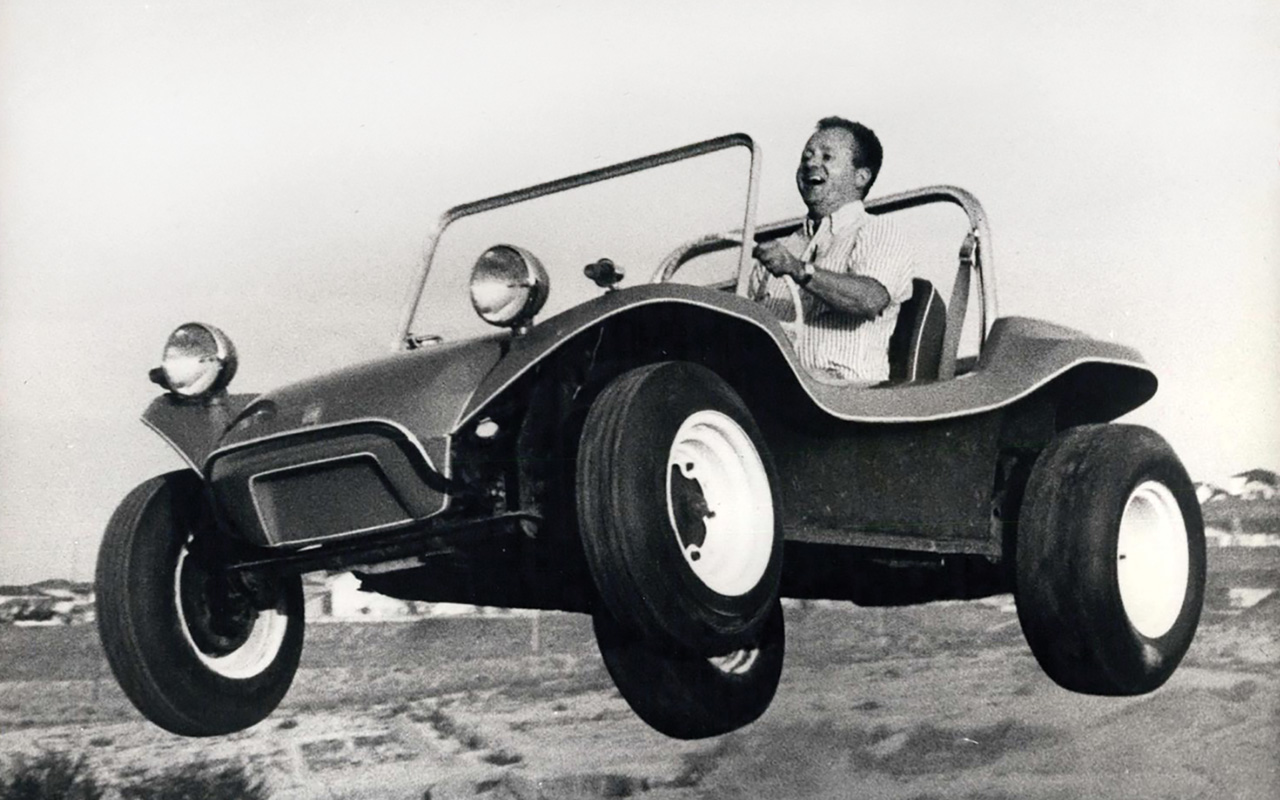 New imaginative design ideas could reignite fan interest. The two-seat Meyers Tow’d, created as its own trailer, was an immediate success; then a sports car with scissor doors and a fixed roof (the Manx SR) was designed by Stewart Reed – now chair of Transportation Design at ArtCenter College of Design. Moving the Meyers Manx uniquely entertaining concept into new categories was then established — along with a future not yet in focus.

Freeman Thomas (born August 20, 1957) is a celebrated creator of imaginative automobile concepts making their way into production. From his standout ideas as a student at ArtCenter to his invitation to join the design studio of Dr. Ing. hc F. Porsche AG (Freeman is a devoted fan) upon graduation in 1983, he has created an impressive portfolio of cars that soon qualified as iconic: the New Beetle and the Audi TT for the Volkswagen Group; for DaimlerChrysler there was a series of popular concepts that reached production including the top-selling 300C sedans and a rebirth for Jeep. Then his trusted design colleague J Mays called from Ford and asked him to begin again as Director, Strategic Design and concept vehicles for North America beginning June 1, 2005.

During November of 2020 Bruce at 94 remained intrigued by his Manx and its fan base, now popularized as the dune buggy the world over. But Phillip Sarofim, Chairman of Trousdale Ventures, and one of those fans, convinced Bruce and his wife Winnie to consider retirement to let him create a broader range of just-for-fun vehicles. To sweeten the plan, Sarofin brought in Bruce’s long-time friend Freeman Thomas as CEO and Chief Creative Officer of Meyers Manx LLC.

Freeman underscored his enthusiasm to be joining one of his design heroes and the opportunity of encouraging his company’s expansion. “The Meyers Manx was not simply a dune buggy, it was a vessel of freedom, and it continues to be. Authentically like Apple, Levi’s, and Coca Cola, the Meyers Manx defined the segment and became a household name that is undiminished today”. 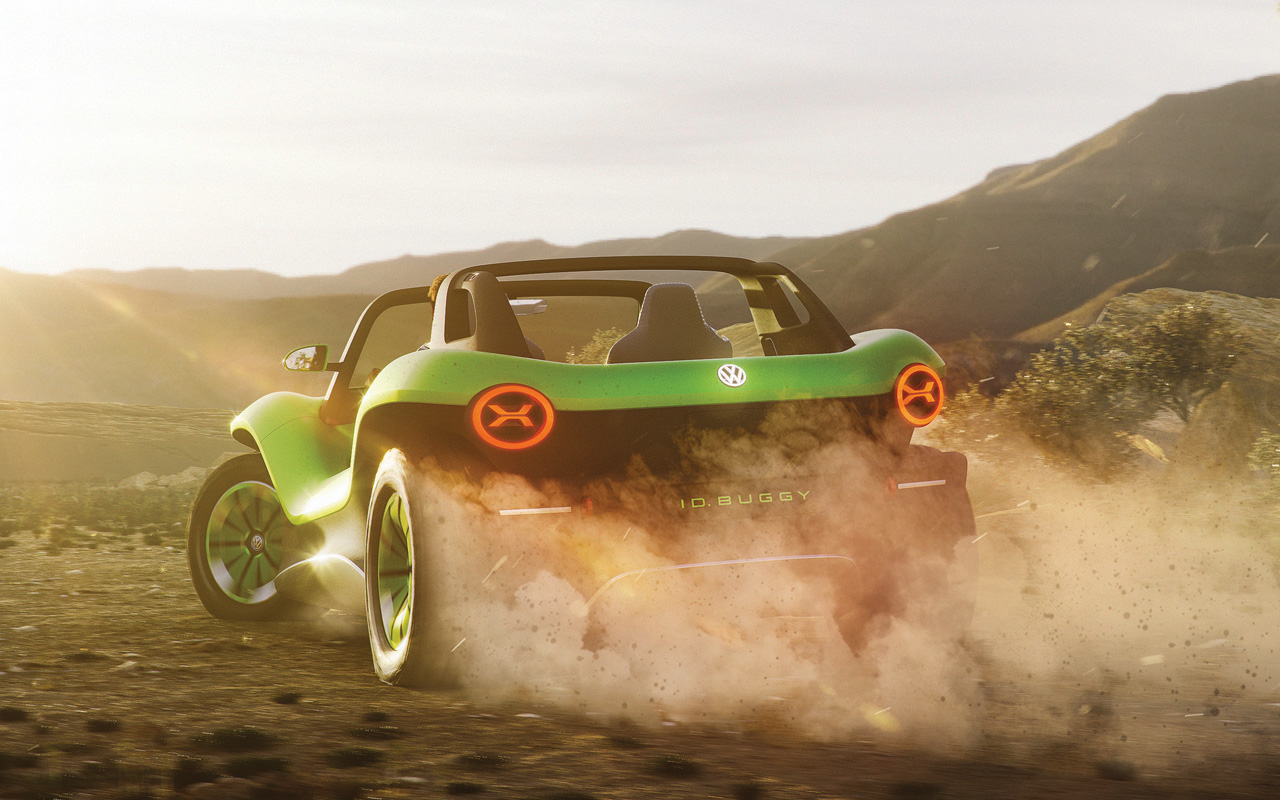 Bruce and Winnie shared their own enthusiasm: “It is with great pleasure and happiness that Winnie and I would like to introduce you to the new future of Meyers Manx. Maintaining the old and introducing the new is what lies ahead. We feel that Meyers Manx LLC can and will do just that! With faith in their desire to continue our legacy, the future will be brighter, happier and sunnier than ever, a wonderful rebirth for what we have created!”

Phillip added: “We are putting together an international dream team of passionate and creative souls to carry on the Meyers Manx legacy of fun, freedom and expression that Bruce and Winnie created. The time is right for us all to get back to basics and simplify our lives! That is what Meyers Manx is all about! It celebrates authenticity, diversity and being a little different.

“It’s the beginning of an exciting journey in bringing new life to a legendary California icon. The timeless design and DNA of the Meyers Manx is the greatest smile machine I’ve ever experienced. We are humbled and honored to continue the Meyers Manx legacy!”

“I was just a character who lived a lifestyle of breaking traditions,” Meyers often explains, “and the dune buggy did that.” 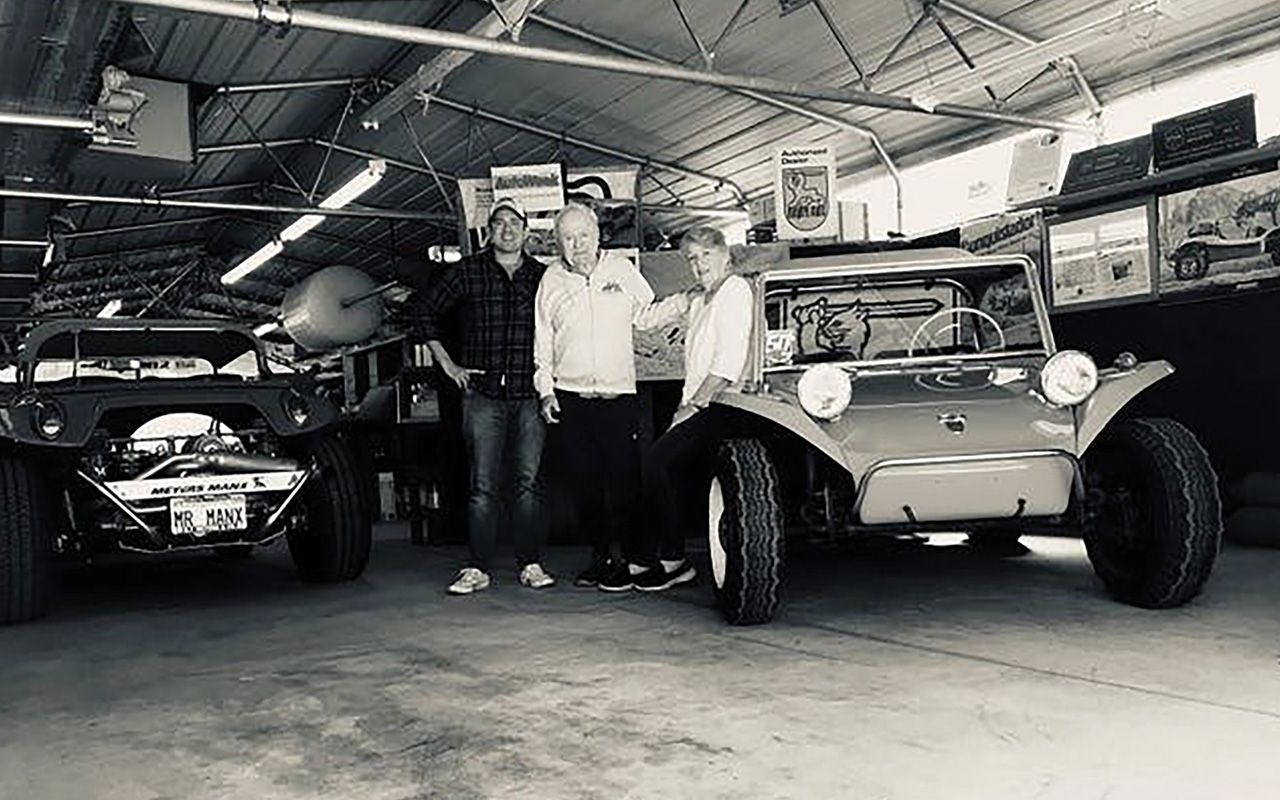 Bruce and Winnie sensing a future