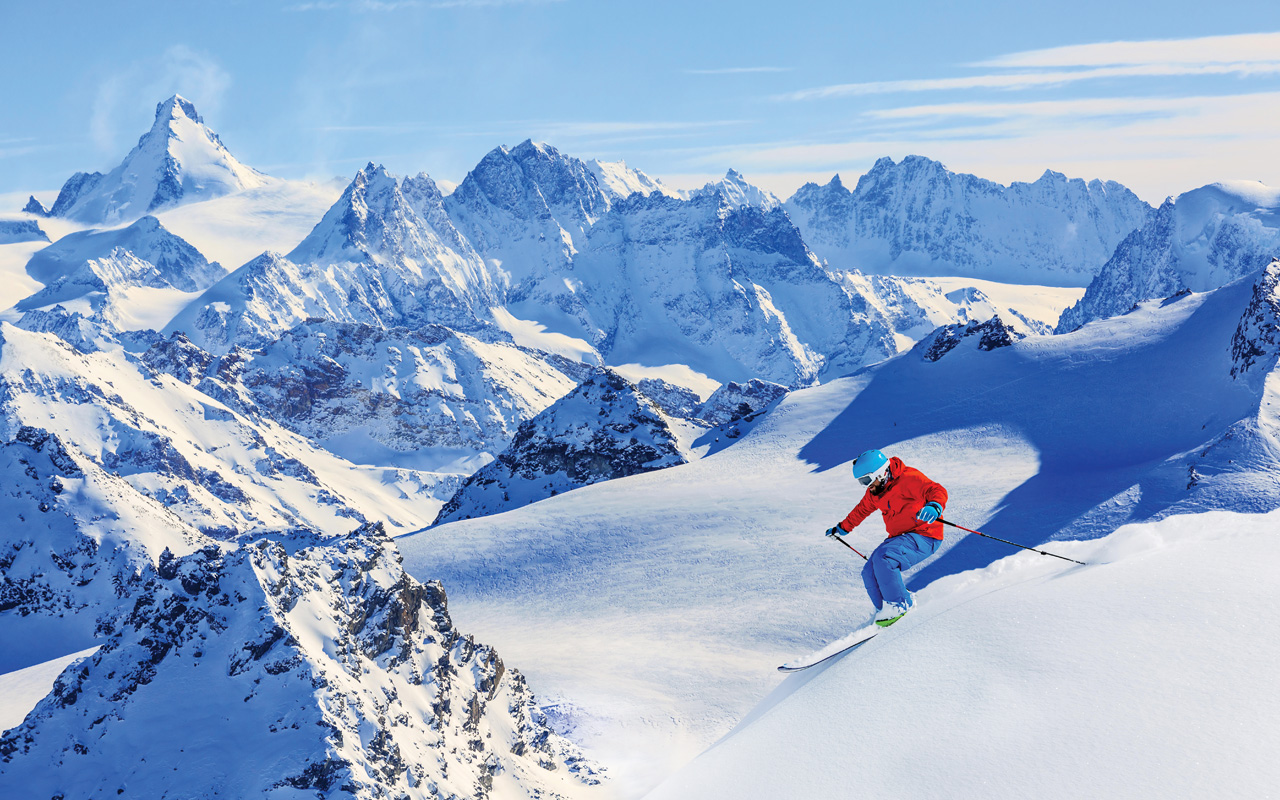 The ultimate family winter vacation is in majestic Switzerland. The Matterhorn above Zermatt’s classic chalets is a sight to behold, and the glamor of St. Moritz transports you to an elegant winter wonderland. Most importantly, the Swiss cater for every level of skiing and snowboarding. While experts will be entranced by the challenging slopes, the resorts have easy cruising terrain and excellent learning programs. There are dedicated slopes and lifts specifically for beginners, and family-friendly lift passes, lodges, and packages. You’ll find fresh powder as well as groomed trails all couched within the backdrop of breath-takingly exquisite scenery and Swiss perfectionism.

Zermatt and the Matterhorn

Along with offering skiing and snowboarding 365 days a year in a postcard setting, Zermatt is famous for its long ski runs, with terrain for all skill levels. Beginning skiers and children will find non-threatening terrain at Wolli’s Park, at the top of the Sunnegga funicular. From here, experienced skiers can access the gondolas, chairlifts, and a cable car up to the Rothorn’s trails and snowfields or link to the Gornergrat ski pistes. The Gornergrat can also be accessed by a rack-railroad that climbs up the slopes of the Riffelberg, where the Riffelhaus 1853 hotel has a restaurant and terrace, all with superb views of the world-famous Matterhorn. Skiers pay only for the mountain areas they ski, with the Easy SkiCard that bills only for actual rides taken. The Stoked Kids Club in the Schweigmatten is a snow sports school that has the latest learning aids and a conveyor belt lift on kid-friendly terrain. Zermatt also boasts a vibrant après-ski scene.

One of the world’s oldest and most famous winter sports resorts, St. Moritz has hosted the Winter Olympics twice and its Olympic ski-jump and slopes are frequently the site of world ski events. But St. Moritz is not just for experts and Olympians. Its more than 20 lifts carry skiers to terrain for all skill levels, and it’s known for some of Switzerland’s best intermediate terrain, with several very long intermediate runs. St. Moritz hosts the Snow Polo World Cup in January and the annual White Turf St. Moritz, an on-snow horserace event, in February. There’s plenty of action in this glamorous resort including ice-skating rinks, tobogganing, Nordic skiing, bobsledding, and kite skiing.

One of Europe’s largest winter sports areas and one of its highest in altitude, Davos is a series of ski resorts, which string for several miles along the valley of the Landwasser River in eastern Switzerland. The two main centers are the completely dissimilar towns of Davos and Klosters; for Alpine village atmosphere, choose Klosters as a base, but the multiple ski areas are interconnected, so it’s easy to ski any combination. All together, they offer more than 200 miles of groomed runs, much of which is classed for intermediates. But the tremendous off-piste terrain attracts a loyal following of experts.

Verbier is a paradise for competent skiers and snowboarders with its well-laid-out runs for long-distance skiing and an abundance of backcountry terrain that make it one of the world’s best resorts for off-piste skiing. The Tortin is one of Europe’s steepest descents. Set on a natural terrace, with views of the Grand Combin and the Mont Blanc group, Verbier is part of the Four Valleys ski area, joining Thyon, Veysonnaz, and Nendaz for a total of more than 300 miles of ski runs and 93 lifts all included in a single lift pass.

Grindelwald, Wengen, and the Jungfrau

The three peaks of the Jungfrau massif, all at around 3,000 feet, provide the splendid backdrop for 180 miles of slopes and runs, which include plentiful intermediate cruisers. Ride the Jungfraubahn railway from the Kleine Scheidegg, easily reached from Lauterbrunnen or Grindelwald, to the highest railroad station in Europe at 10,000 feet or take any of the dozens of lifts and cableways to reach runs as long as 8 miles. Grindelwald-First is a favorite of boarders for the freestyle superpipe by the Schreckfeld station and for off-piste free riding.

Winning top honors for the quality and dependability of its snow in 2021’s Best Ski Resort Awards, Saas Fee is close to the glaciers of the Dom (the highest peak entirely in Switzerland) and the Allalinhorn, in the Valais region. Ride the Metro Alpin, the world’s highest underground funicular railway, to dine in the world’s highest revolving restaurant, the glass-walled Drehrestaurant Allalin.

This less-known resort is a sure hit with intermediate skiers, with 140 miles of groomed runs across three different mountainsides. Most of these are blue-rated and above tree line, so they are open to spectacular views elsewhere reserved for summit-skiing experts. The region also gets more sunshine than many other Alpine resorts. In choosing a base, Arosa is the more attractive ski town. You can reach the design-style Home Hotel Arosa by bus from the train station, making a car-free ski vacation easy.

Only 45 minutes from Lucerne and just over an hour from Zürich, Mount Titlis is one of Switzerland’s most popular attractions, with tourists ascending to its summit in a state-of-the-art revolving cable car year-round. But in the winter, the mountain and the small monastery village of Engelberg at its foot become Central Switzerland’s largest family winter sports resort. The quality of the powder and the abundant high-Alpine terrain here make it especially popular with free riders and off-piste skiers. Another perk is that much of the off-piste terrain is readily accessible from the lifts. 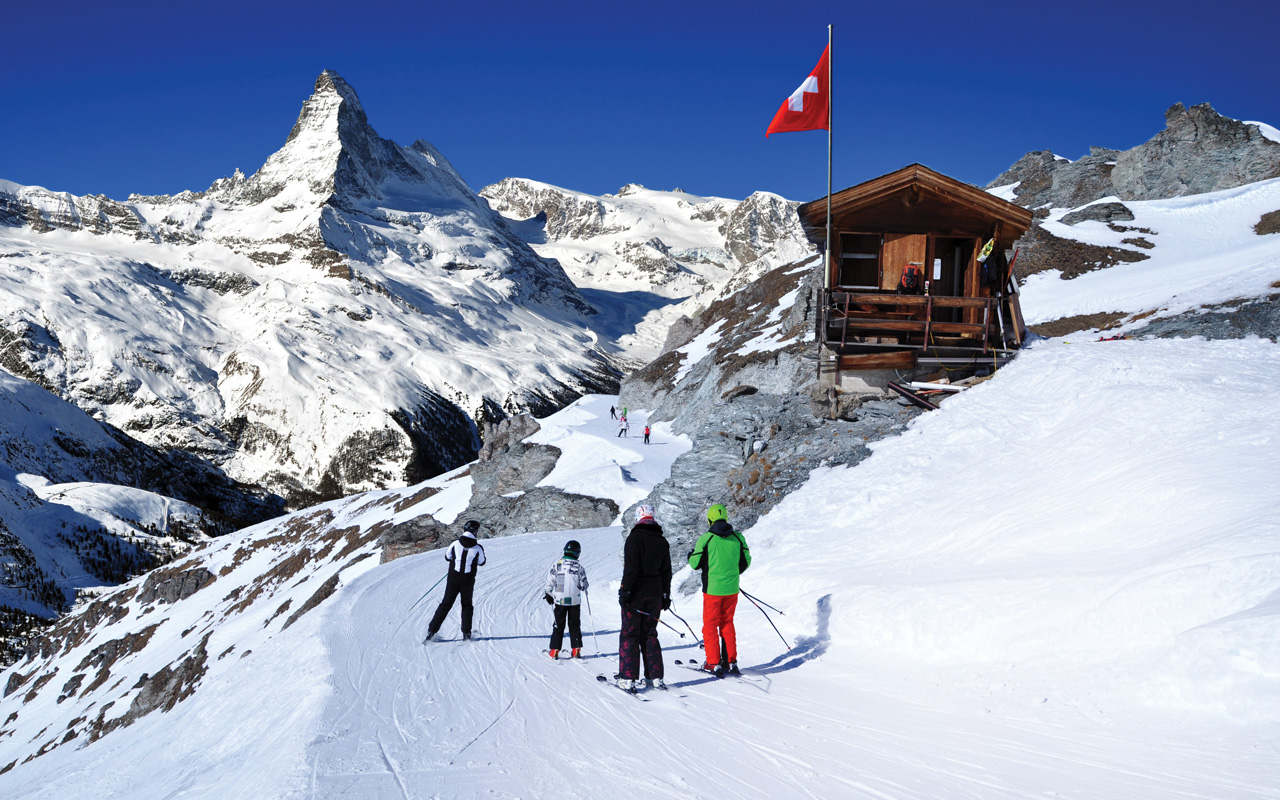 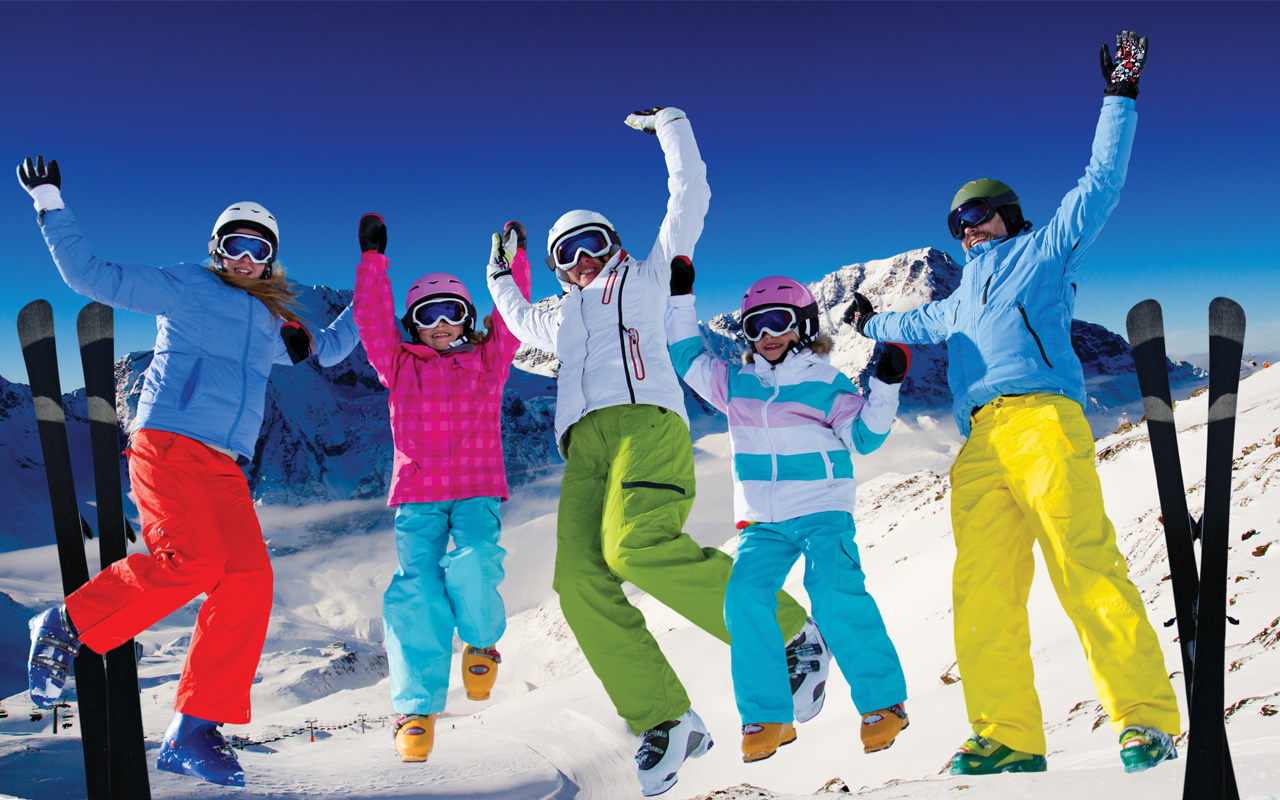 Family skiing in The Matterhorn 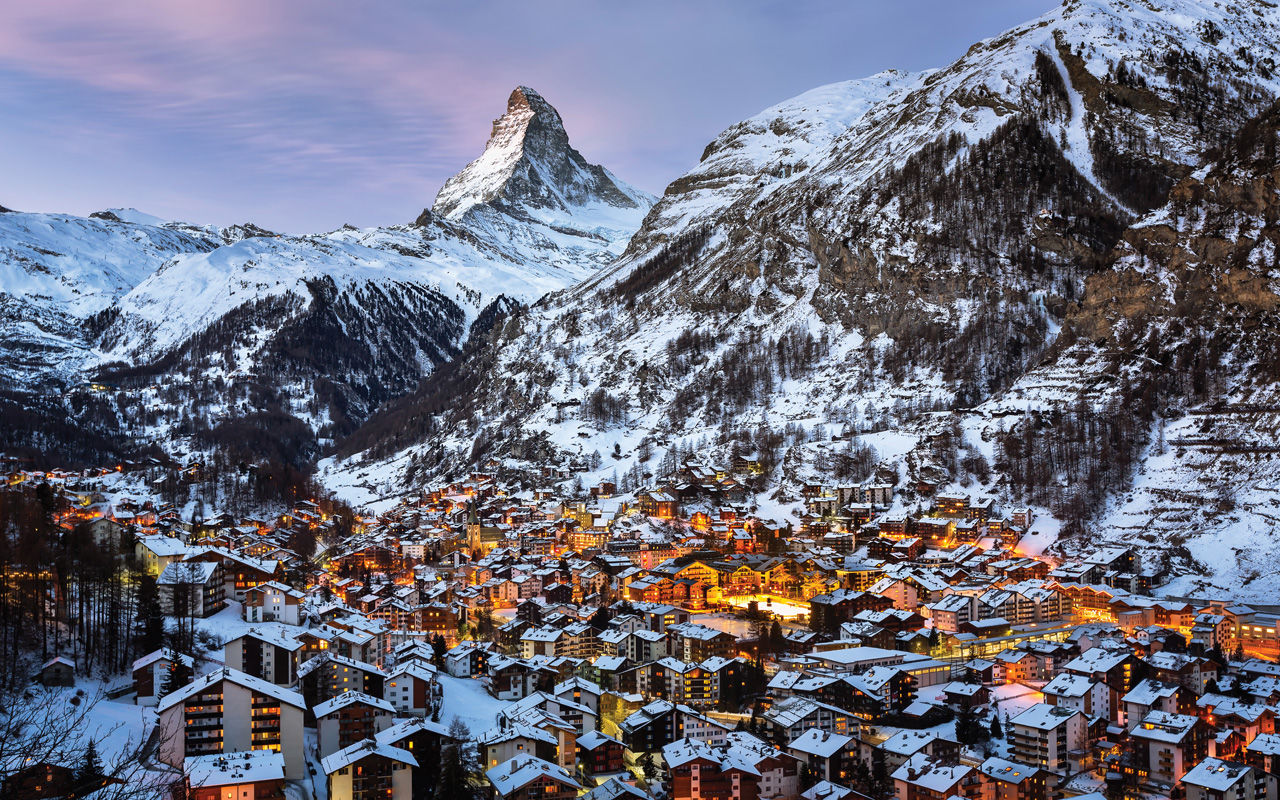 Aerial View on Zermatt Valley and Matterhorn Peak in the Morning 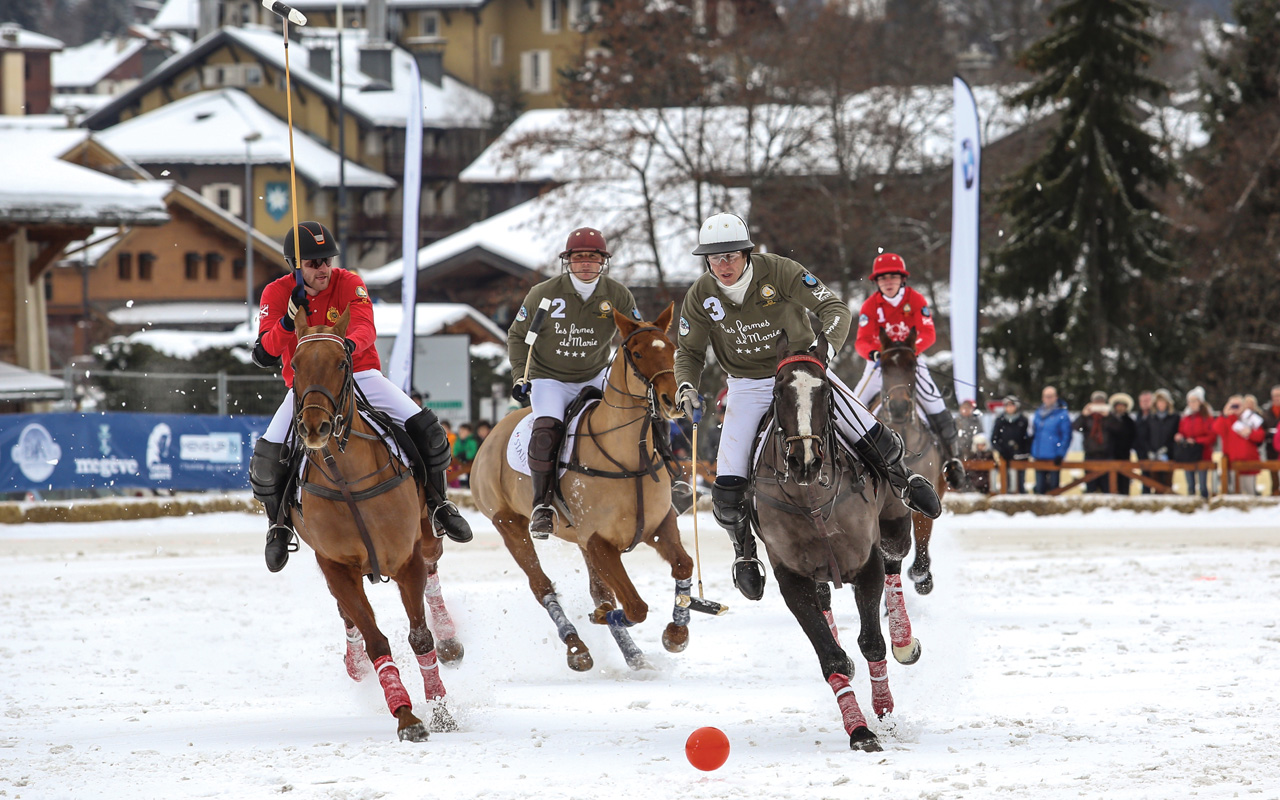