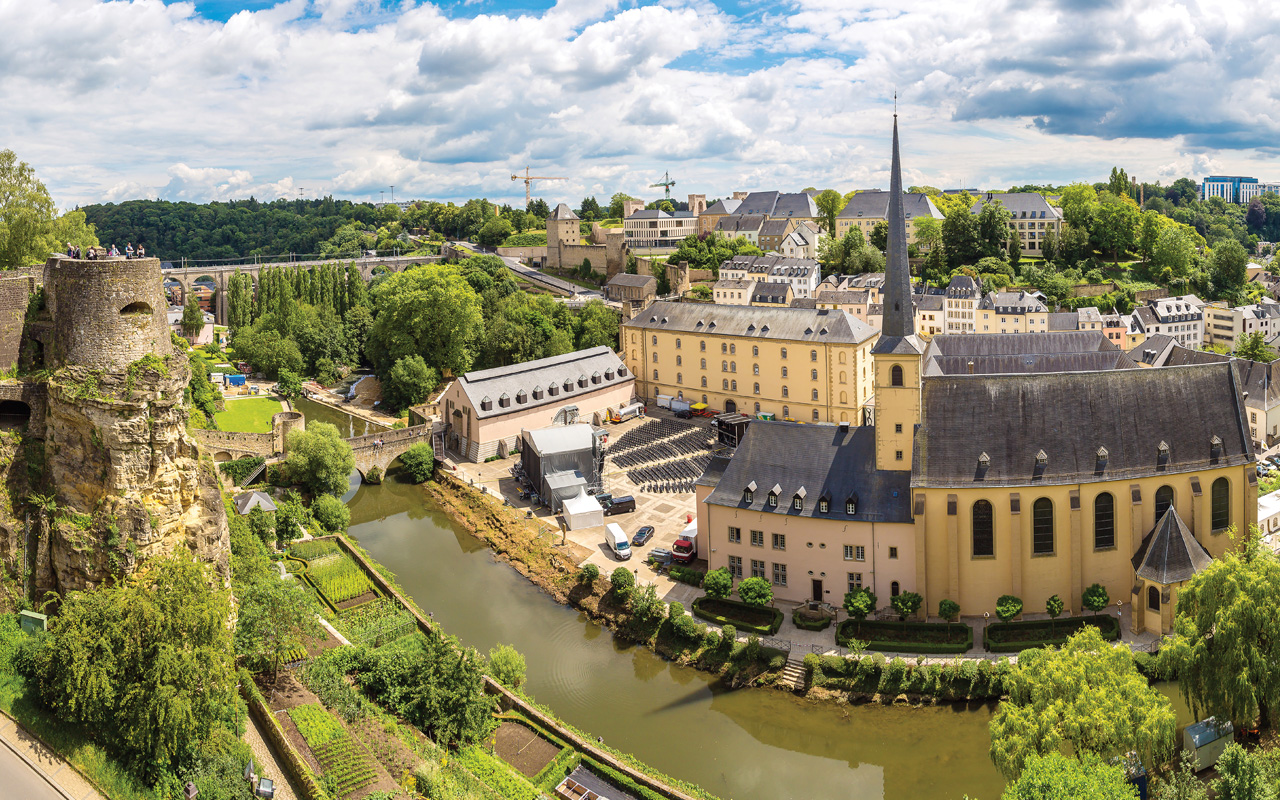 This is a fascinating look at the 10 wealthiest countries in the world. Gross Domestic Product (GDP) is a measure of wealth in each country and that measurement is derived primarily from the country’s export revenues, incomes, consumption, and the value of goods and services the country produces in the span of a year. Setting the benchmark according to these metrics and establishing the same parameters across the board is what makes GDP so popular in demonstrating and comparing wealth.

Here is the ranking of the 10 wealthiest countries globally, using their GDP per capita measurements, and Purchasing Power Parity (PPP). PPP is a popular metric used by macroeconomic analysts that compare different countries’ currencies through a cost of a “basket of goods” and allows for a more direct comparison of economic productivity and living standards between countries.

Known for high-income levels and a low unemployment rate, Luxembourg is the richest country in the world. While its inflation rate rose to 6.8% in August, 2022, its wealth stays stable. According to the World Economic Forum, the primary factor for Luxembourg’s high GDP is the large number of people working in this tiny, landlocked nation while residing in the neighboring western European countries. The advanced infrastructure and high values for the labor market attract investment and duplicates of the big outside firms.

Having depended on the steel and iron industry for a long time until they were no longer profitable in the 1970s, the nation adapted quickly and smartly. Today, Luxembourg boasts one of the most educated labor forces in the world, and it prospers from a mix of industries and an import-export economy based on financial services. Small to medium-sized companies expanded, while multinational corporations demanded a highly-skilled labor force with the ability to speak multiple languages. There is also a small but prosperous agricultural sector in the country. 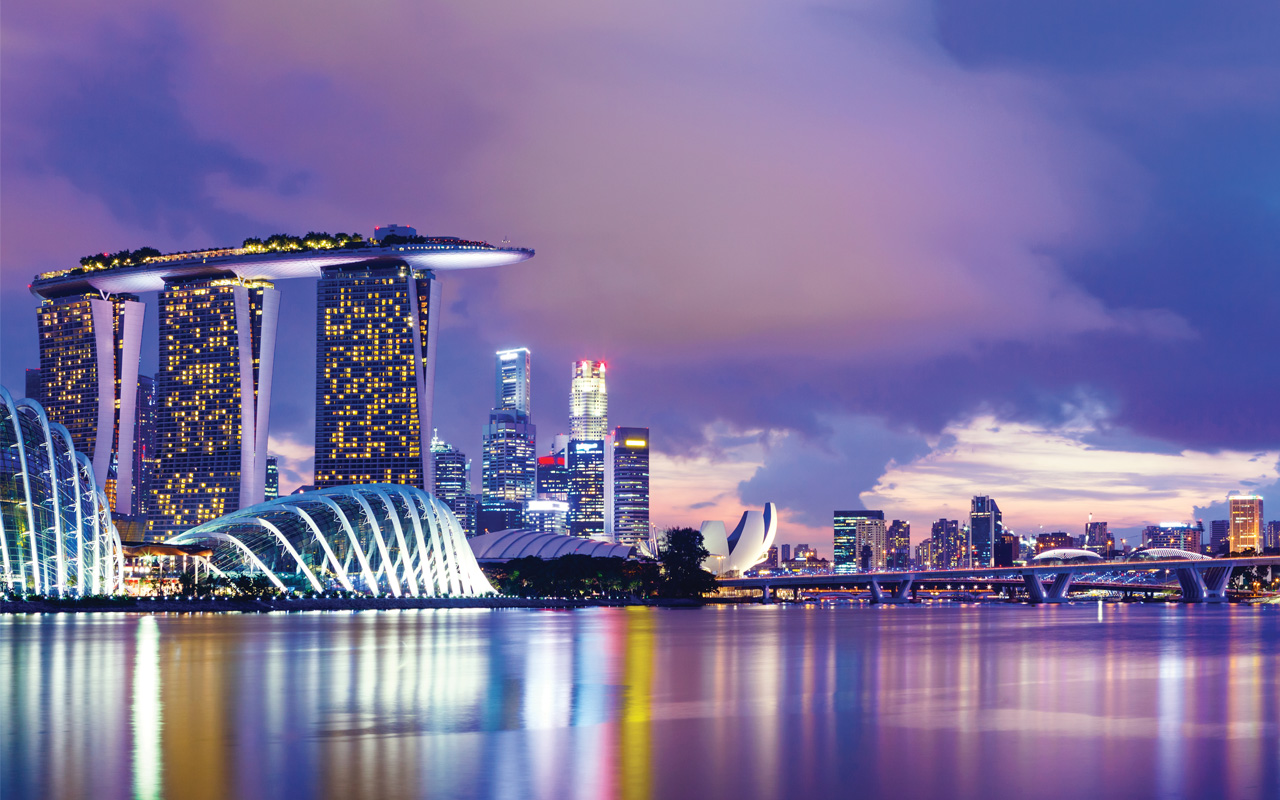 Singapore has a highly developed free market economy. With no natural resources to bolster its economy, the Singaporeans are highly inventive and creative – building their country into the economic powerhouse that it is today. They attracted global financial services firms to their shores to strengthen the economy. The country’s main exports are electronics, biotechnology and chemicals. The jobs available to its citizens center around manufacturing, services, transport engineering and logistics – and they are well-paid jobs. Singaporeans built a high-end infrastructure while expanding their tourism sector significantly. Millions of tourists visit every year. The leaders of the country also established an investor-friendly economic environment which attracts massive foreign investments. Political stability is a key strength in Singapore. 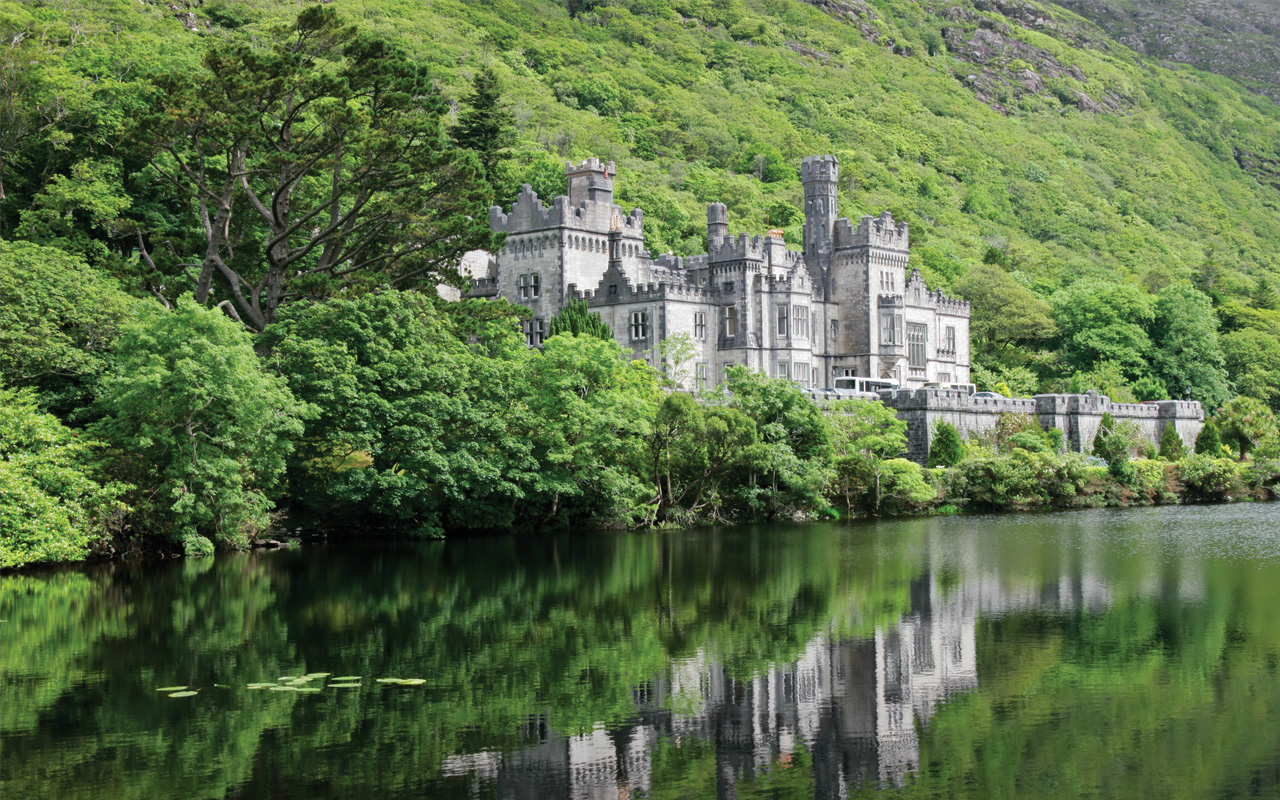 Ireland has taken Qatar’s third place in the last year. Low corporate taxes continuously attract numerous multi-billion-dollar companies to relocate and grow their business in Ireland, contributing to the GDP and the high standard of living for the people. Although citizens receive high wages, the income per capita grows slower than the collective GDP. The country’s stability and ongoing wealth gain from tourism, agriculture, and manufacturing, is highly commendable. 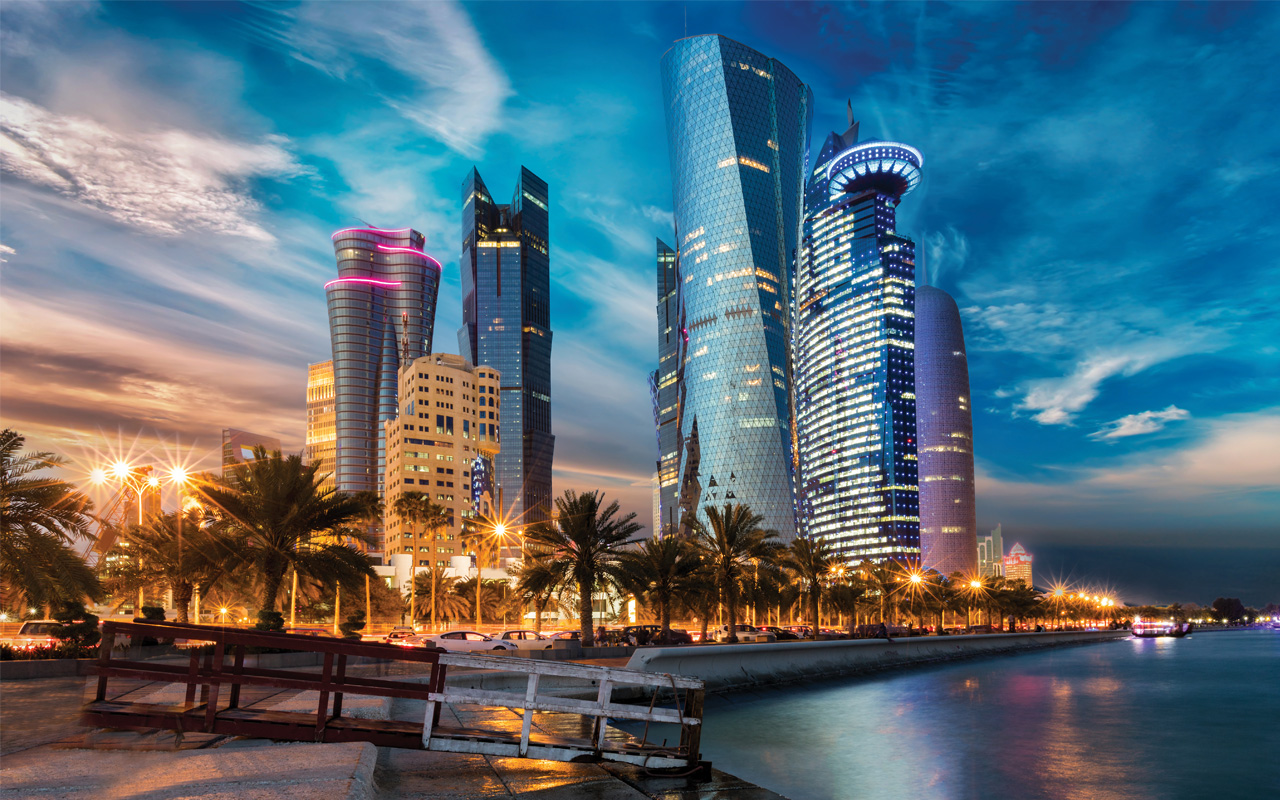 With only a small fishing industry and almost no schools just fifty years ago, the once-sleeping peninsula off Saudi Arabia’s eastern coast has become a significant oil-exporting world center in the last two decades. Qatar first began massive exports of natural gas in 1997 to Japan and Spain, expanding to other countries in the early 2000s. Fifteen years and 14 natural gas plants later, its GDP has grown exponentially from $30 billion to over $200 billion. Qatar has the largest natural gas reserves globally, following Russia and Iran, at nearly 900 trillion cubic feet, earning 60% of its collective GDP.

Having discovered oil in 1939 and natural gas 30 years later, it began producing 46,500 barrels per day in 1951. Although some of the revenue was used to start modernizing the country, the Royal Family accumulated much of it, with shares also going to Great Britain, its ruling country. After gaining independence in 1971, Khalifa bin Hamad deposed his father and increased spending on social programs, housing, health, education, and pensions, cutting the Royal Family’s allowances. There is still much room for improvement, though. This is a patriarchal society that denies many civil rights. Qatar’s wealth is further boosted by the significant returns on investments in foreign brands, banks, and even the Paris Saint-Germain soccer team and real estate in London. 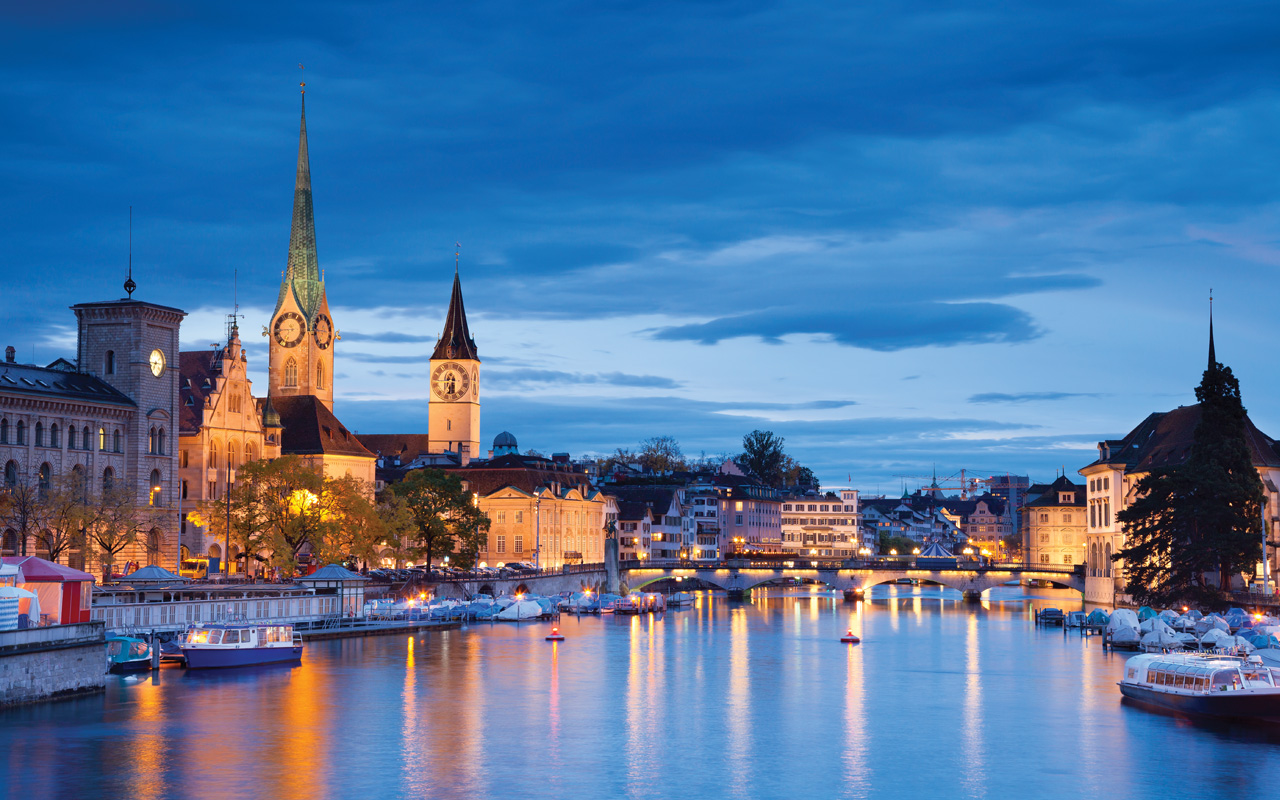 Switzerland is one of the most beautiful countries in the world and its citizens are considered one of the happiest and healthiest people on earth. This sophisticated country is home to German, French and Italian-speaking citizens, living peacefully and thriving together for over 800 years. The Swiss never go to war or get involved in political squabbles. Their neutrality and emphasis on peaceful co-existence enhances their stability. While the cost of living is high and products are expensive, the Swiss Frank’s strong value with a high conversion rate to other currencies, creates further stability. Investors and international businesses love to work with the Swiss and view their country as an extremely safe place for their investments. The term ‘Swiss perfection’ is apt and well earned. The Swiss innovatively and meticulously plan and prepare for the future. They are highly efficient, and everything runs on time.

Exports contribute the most to the GDP, with gems and precious metals bringing in nearly $100 billion a year, followed by pharmaceuticals and machinery. The mountains, the charm of its cities, and the luxurious lifestyle attract millions of tourists every year, while the highly-developed tourism sector aims to please. With no capital gains tax, a low value-added tax on its products at 7.7%, and lower than average income taxes, the Swiss also choose to invest in their economy, preferring to buy local and paying for garbage disposal. 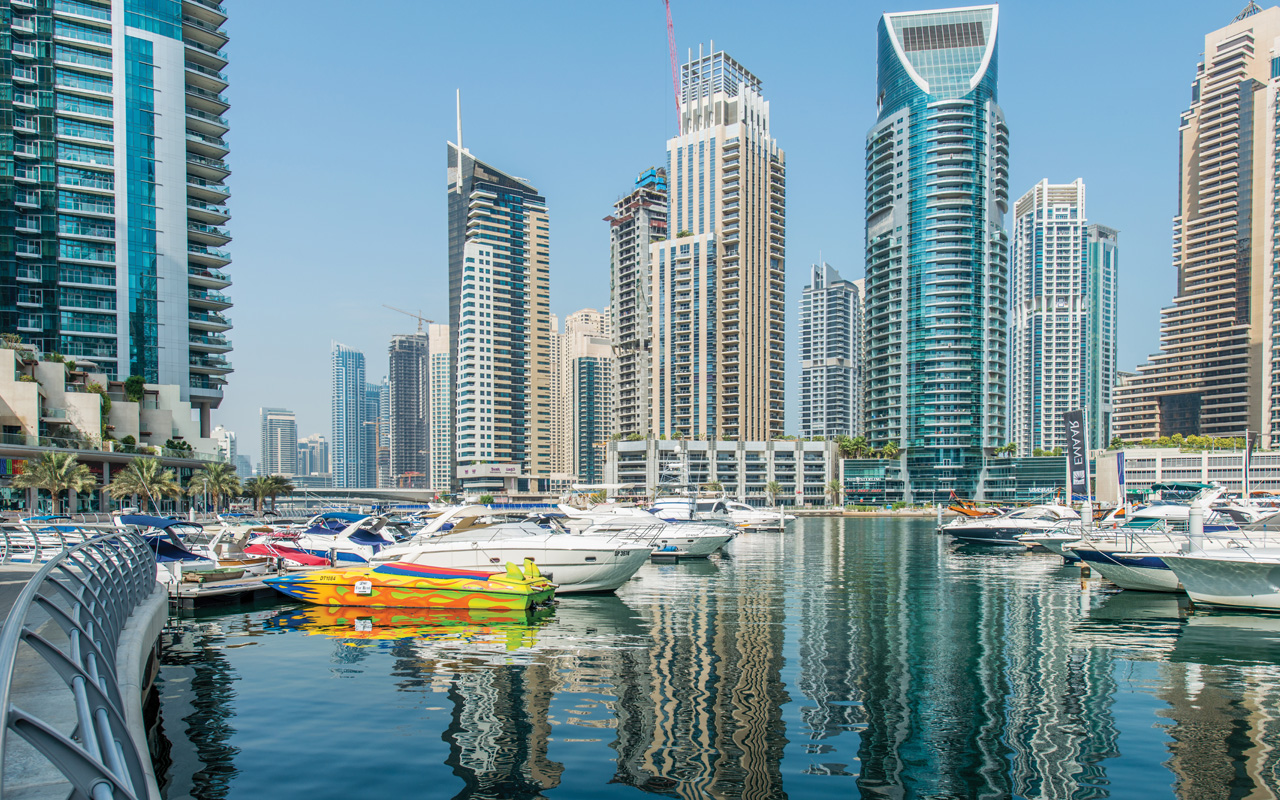 The pearl industry prevailed in this country from the 1770s until the late 1930s, when pearl-diving was a hobby turned into a significant source of income for the people living in the small villages. Having been able to establish some of the most luxurious resorts in the world, Dubai, along with the rest of the country, has moved on to tourism, with large investments into the industry.

The discovery of oil in the late 1950s caused a clash between Dubai and Abu Dhabi citizens, with the latter gaining the upper hand over the oil boundaries and becoming richer while the former struggled. While Abu Dhabi thrived, the ruler of Dubai, Sheikh Rashid bin Saeed Al Maktoum, did not lose hope in his state’s potential, loaning tens of billions of dollars to invest in the state’s infrastructure in 1958, completing its first airport by 1960. According to the government of the UAE, the country has oil reserves estimated to be about 98.6 3 billion barrels, and most of these are located in Abu Dhabi which is estimated to be about 92 billion barrels while Dubai has approximately 4 billion barrels. Zakum oil field contains most of the oil in the country and is the 3rd largest oil field in the Middle East hosting about 66 billion barrels of oil. The country produces an average of 2.9 billion barrels of oil every day, and it is planning to raise oil production to 5 million barrels a day by 2030. The state-owned, Abu Dhabi National Oil Company (ADNOC) is the 12th largest company in the world and is responsible for much of the oil produced in the UAE. 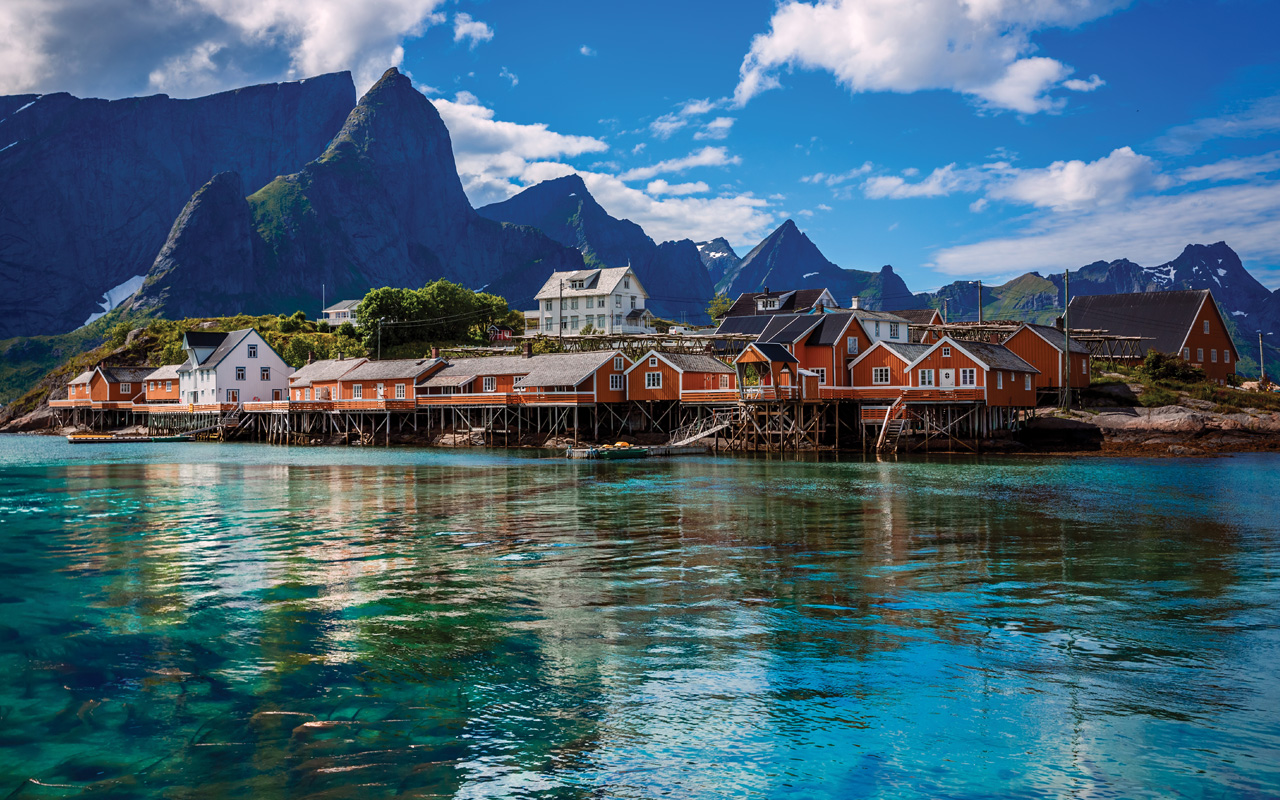 Unlike Qatar and the UAE, Norway’s wealth is evenly spread across its population and thus, it is known as one of the happiest places on earth where sharing and egalitarianism triumph. In terms of quality of life, Norwegians boast the highest standard of living on earth, and rank top on the human development index with advanced education systems, a generous social security system, and universal health care. Its raw oil and gas resources exports account for a strong economy, while abundant reserves guarantee future prosperity. Norwegians have plenty of seafood, hydro-power, lumber, minerals, natural gas, and freshwater. Petroleum is another export that has been bringing Norway riches since the 1970s.

The government invests in free education for its citizens, while parents insure that children learn the importance of productivity from an early age in school. Keeping busy with work that is enjoyable is a cultural staple in Norway. The main occupancies include telecommunications and technologies. Featuring unemployment and poverty rates at 5% and 0.5%, respectively, it is no wonder that Norway’s standard of living is enviable. High wages give Norwegians high purchasing power, and they are able to spend extravagantly abroad. Europe loves the Norwegian spending power. 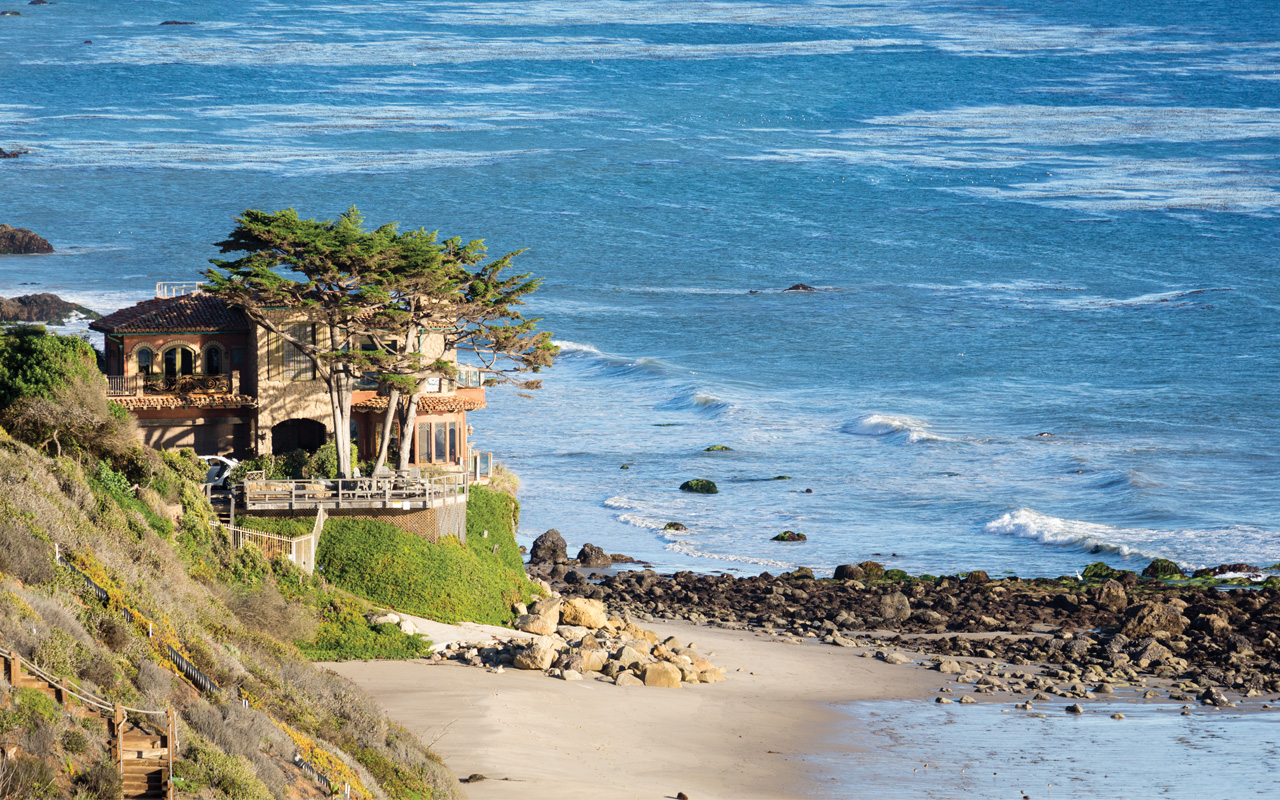 With resource-rich land and the biggest economy in the world, the United States has very strong purchasing power. It supplies much of its own energy and can export its oil and gas for profit. The size of the U.S. economy and the high rate of real GDP growth is unmatched by any other country in the world. As a relatively deregulated market economy with a decentralized political system, there are virtually no state-owned enterprises, and the strong legal system protects the liability of investors. The United States attracts the most talented people to its shores because the universities have an excellent reputation, and the American Dream makes rapid upward mobility very attractive to talented, hard-working and creative people across the world. It is possible to make a fortune in the United States without having to wait 50 years. The US would enjoy a higher ranking if not for the disparities between rich and poor. 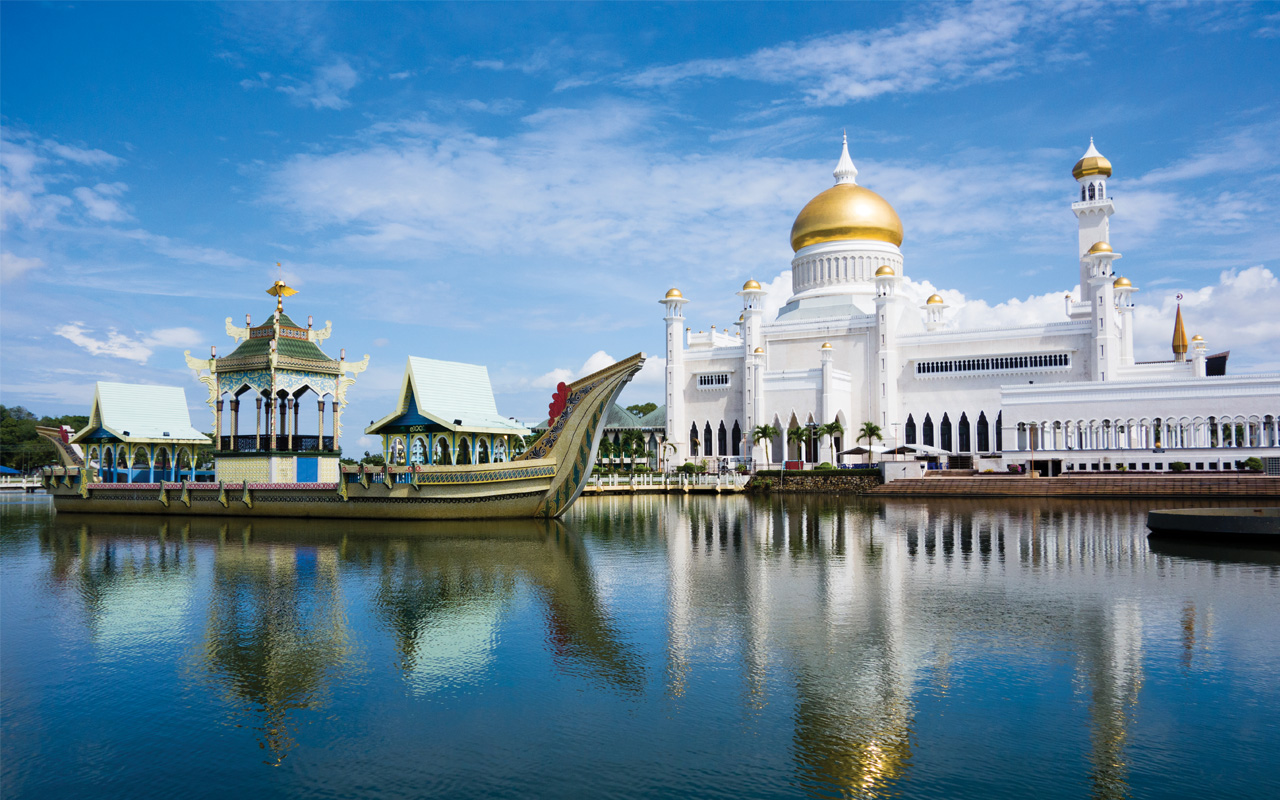 You’ll notice that the Sultan of Brunei appears at all Royal events across Europe. That’s because he is hugely powerful because of his wealth. Having gained independence from Britain in 1984, the small country of Brunei, situated in South Asia, quickly grew to become one of the richest countries in the world. Its Sultan regulates everything from the military to the economy, imposing punishing rules while also providing free education and medical care for its citizens. Brunei has an over 97% literacy rate. The country’s wealth is not equally distributed, with much of the population living in poverty. Nevertheless, Brunei’s public debt is only 2.4%.

What has made Brunei so wealthy is its offshore oil drilling industry. Massive capital is accumulated from those exports. The wealthy people in Brunei live very extravagant lives, but freedom of choice is curtailed on many lifestyle choices including alcohol consumption and homosexuality. Despite these restrictive rules, the Sultan of Brunei leads a scandalous life when it comes to his own personal choices. 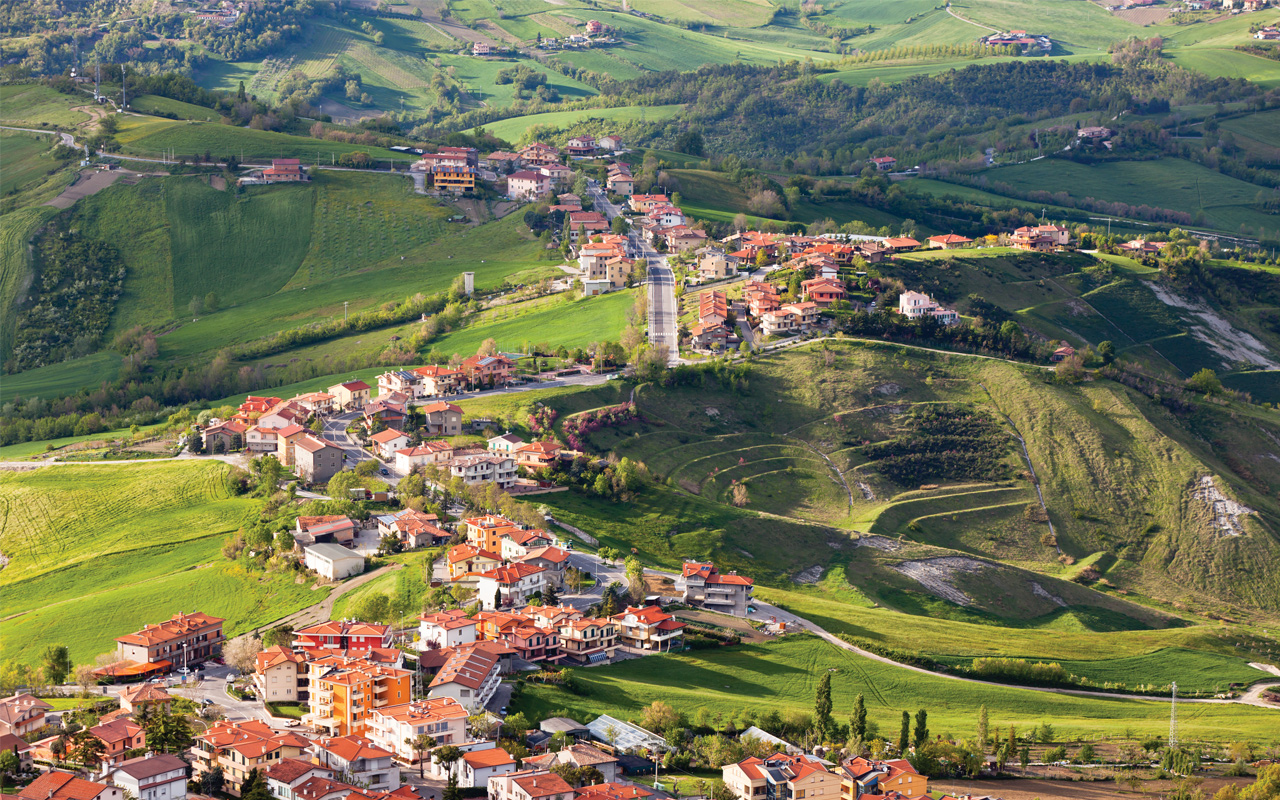 Resourceful citizens who have successfully adapted and utilized their available resources – accounts for the stable prosperity of San Marino. Traditionally, San Marino was a country of farmers and stone-quarrelers, producing cheeses and agricultural products, along with unique stone-made trinkets. Today its hard-working citizens contribute to the economy by producing ceramics, tiles, building materials, furniture, clothing, fabrics, paints, quality spirits, and wines for export. The export of fruit has also been a factor in the nation’s recent economic growth.

Completely enclosed by Italy, San Marino still retains a close relationship with the country it formerly belonged to, including payments made by the Italian government for monopolies on tobacco and other commodities on this South European microstate. San Marino’s bank system is also closely integrated with the European Union’s through the Italian economy: its monetary and customs systems. While the cost of living in San Marino is comparable to Italy, the even distribution of wealth in this socialist society has led to one of the lowest poverty rates in the world. It also has a low local population count and more than half its GDP comes from a healthy tourism industry.

References: Worldatlas.com: The Richest Countries in the World.