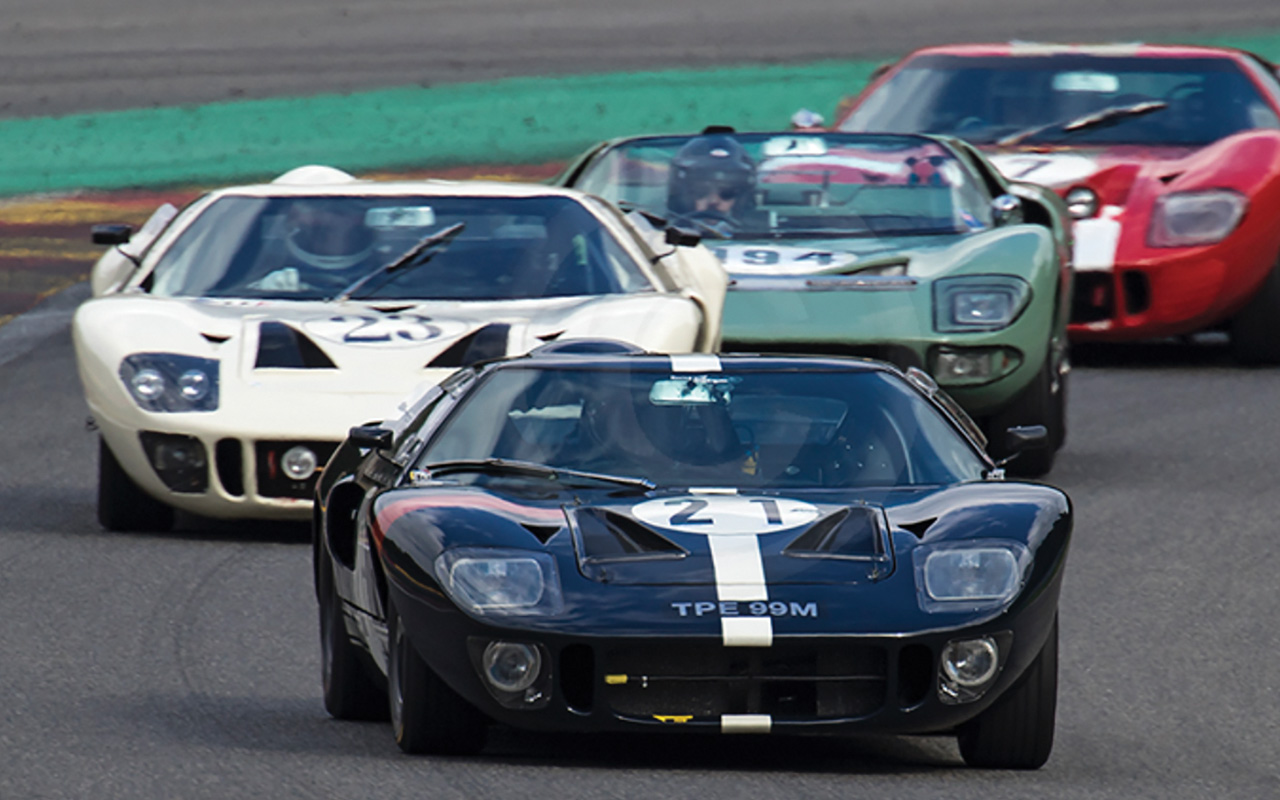 The Incredible Automobile Business Trajectory of James D. Farley, Jr. — and His Race to Relax.

“Hi Larry, this is Jim Farley … (pause) … I bought the B20 from John Lamm. The restoration is complete and it has been invited to Pebble Beach.”(The concours d’elegance internationally recognized as one of the most important exhibitions of historic automobiles in North America).

My cerebral Rolodex is rotating fast enough to cause a cranial breeze. That name alone is enough to place my mental awareness somewhere else. In seconds I was engaged and remembered the name I only knew from a text from John about the sale of his (our) 1955 Lancia Aurelia B20 — an automotive treasure to the cognoscenti — but virtually to no one else. Whoever Jim Farley was, he obviously qualified and had given the lovely old coupe the attention its historic significance deserved. Beyond that he was a suddenly-admired unknown.

“Will you be there?” he added.

“If you had a ticket in your hand tomorrow could you make it?”

“Fed Ex will deliver it tomorrow. You should be there with the B20.”

Who was that guy? His name was only vaguely familiar after John had told me he was the new owner of a car we both loved, and it would be in very good hands. Google supplied a dazzling elucidation. John Lamm said he had been a friend for years and he was a Ford guy; credential enough for me.

James D. Farley, Jr. began his corporate mentorship at the knee of his grandfather, Emmet Tracy, who began his career building Model Ts at the historic Ford Rouge plant when it opened in 1917, then built a Lincoln-Mercury dealership in Grosse Point, Michigan and later, a production component supply business. Mr. Tracy would do the best he could to see that Jimmy would do better. During Jimmy’s Christmas and summer visits to Michigan he would read his always-fascinated grandson important stories from Automotive News. Along with the select news features, the rapidly maturing youngster was being exposed to the industry vernacular and the weight of its meaning from manufacturing to sales — and support.

His father was a Citibank executive in New York City and a trustee for Georgetown University. His son earned degrees in economics and computer science there. His other trusteeship was with UCLA’s Anderson School of Management where Jim completed an MBA in international business leadership in 1990.

He began his automotive life by building engines for a local business until he had saved the $500 to take ownership of a 1966 Ford Mustang 289 coupe with a blown engine. He moved it into a workspace and spent all available time recreating a new ’66 Mustang. That advanced degree qualified him to later work with Phil Hill (America’s first grand prix world champion) and Ken Vaughn in their Santa Monica classic car restoration shop – one of the most prestigious in the country. He loved the challenge of perfection in that place, but he remembers coming to the conclusion it was more a hobby than a career.

At the completion of his UCLA/Anderson MBA he faced the annual rush of Detroit industry recruiters, but from the viewpoint of the Pacific coast, his grandfather’s devotion to the heart of American automobile manufacturing had lost some of its appeal.

That brought him and his computer science degree to IBM Development in Santa Monica. That emersion therapy made him a candidate for Toyota’s startup car company in Torrance. The Lexus import-luxury brand had been launched in 1989 and it was quickly causing spasms in the German makes who considered it their territory. Lexus was filled with patented technology and needed a new language for marketing to a new-century customer base.

Farley committed to Toyota in 1990, was installed in the strategic planning department, and served in several product and marketing positions in the United States and Europe. One of Farley’s most noted accomplishments was the successful launch and rollout of Toyota’s new Scion brand. 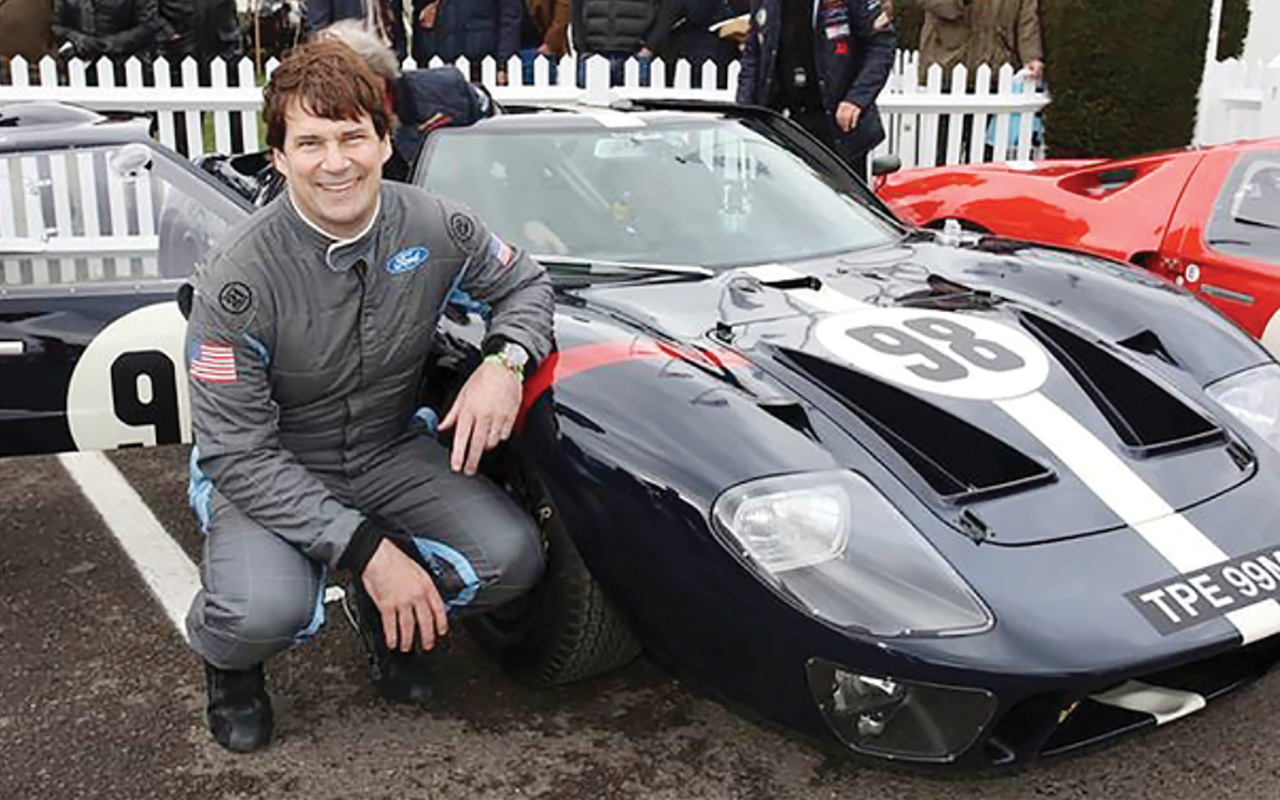 With GT40 at Goodwood

“He wanted all the challenges,” said Dave Danzer, one of Farley’s earliest bosses at Toyota. “He wanted to learn the dealer experience. He wanted to work on small cars, which is a big deal in Europe. He wanted to go to plants and experience manufacturing and assembly. Jim was highly motivated, not so much by money and I don’t think by titles.”

“He really loved cars — fast, beautiful, classic cars,” said Danzer, of Manhattan Beach, California, the retired group vice president, corporate planning for Toyota and Lexus in the U.S. and Mexico. “He worked around the clock. He had a very strong work ethic or he wouldn’t have made it at Toyota. He was demanding on himself and his people. He was very respectful of the Japanese, and he earned their trust.”

“We grew every month for 20 years at Toyota,” Farley remembers. “It was all about new opportunity, new growth, finding new products that didn’t exist in the market.”

Dealing with an ongoing crisis, by 2006 Ford’s board chairman Bill Ford Jr. was in search of a new direction, new energy. He found and recruited Alan Mulally, an accomplished key executive from Boeing to guide the company. Mulally, who drove a Lexus when he came to Detroit, publicly declared that he would benchmark Ford against Toyota. Soon, getting Farley onto the team would become part of the strategy.

Mulally promptly shocked the Motor City when he confessed to driving a Lexus because it was “the finest car in the world,” wrote Free Press columnist Tom Walsh at the time. Mulally “knows Lexus cars are better than anything currently in Ford’s lineup, and he doesn’t care if Ford employees or the media hear him say it out loud.”

That is the bold leadership Farley was anxious to join.

Mulally created a new position for Farley, making him the first vice president of marketing and communication at Ford.

In fall 2007, Farley and the Ford CEO met in a lobby of a private hangar at Los Angeles International Airport.

“I watched Jim get out of his car,” Mulally told the New York Times. “I remember his hello, his eye contact, his questions, how articulate and genuine he was. I knew right then this was the person I wanted.”

The talks went well. And then tragedy struck. The plan was put on hold.

Lia Farley gave birth to twins prematurely and, after complications, the infants died.

Life came to a screeching halt.

Shortly after he joined Ford in 2007, a friend who loved racing left Farley an early 289 Cobra with a racing history, but he had to promise to drive it. Off to school again with that intense focus. He mastered the driving-in-competition lessons, secured his racing license — and that was just the beginning.

The Cobra let him run close to the front of a pack of racers, until it let him lead. That feeling raised the temperature of a competitive fire that had been dormant since school athletics. He drove harder, made like-minded friends, and smiled more. 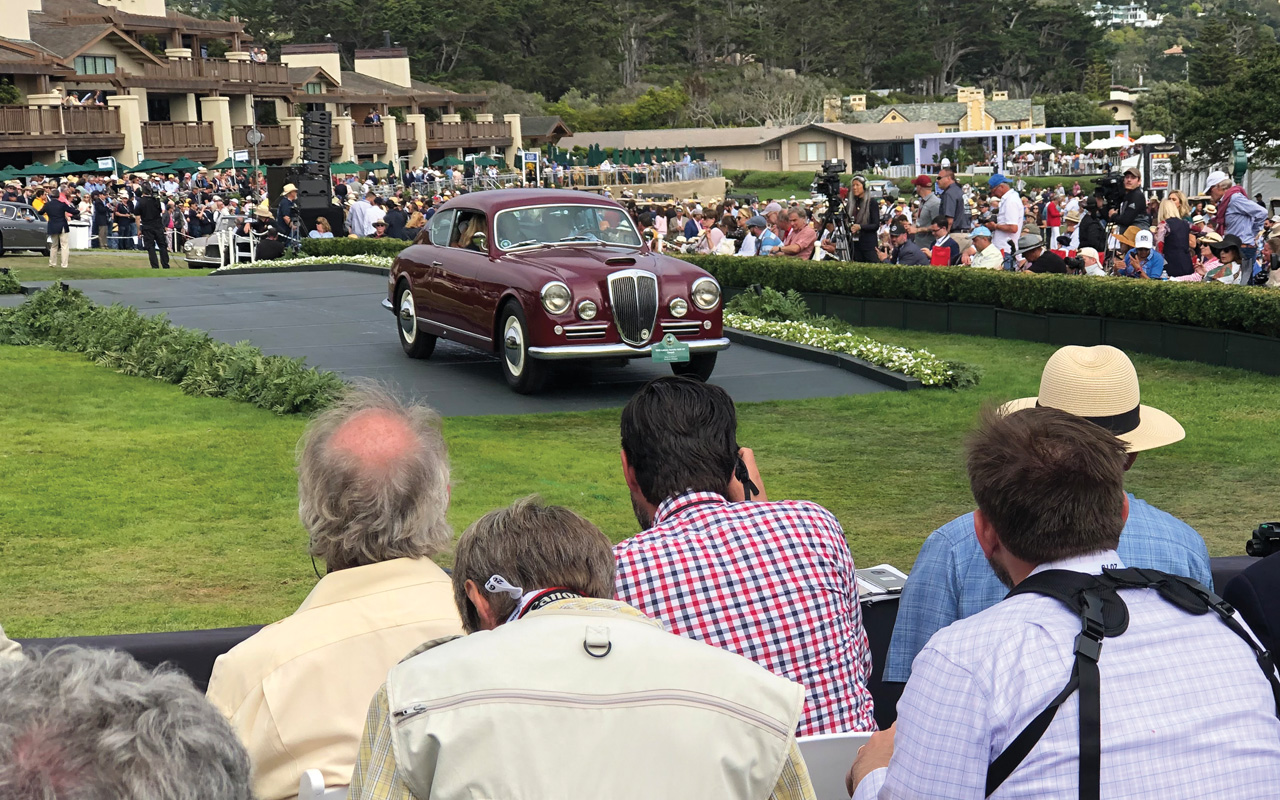 Lancia B20 on award ramp

It eventually occurred to him that a powerful V-8 in a car designed for a 2-liter six might not be a safe place to risk it all. Competing was the point, so in 2012 he found a class-competitive 1978 Lola T298, a sports racing car developed for the track and powered by a Ford-Cosworth BDA 2.0-liter engine (“I only race Fords”).

The Lola gave him the taste of regular racing success and confidence in his ability to drive at the limit. It was time to own the ultimate Ford. He explained how he accomplished the price of a legend to the curious press: “So I sold everything. Every vehicle I owned, golf clubs, everything. I’m all in.”

With growing enthusiasm, “The GT40 is the ultimate Lola for me [Eric Broadley registered his 1955 Broadley Special in May of 1956 as ‘Lola’ and finally the Ford V-8 Lola GT in 1962 became the inspiration for the Ford GT40 of 1964. See: Roy Lunn WML November 2017]. It’s a closed car, it’s fast but still V-8-powered and it has the ultimate history for a Ford.”

He accepted a move across the Atlantic in 2015 and spent three years as president of Ford Europe, where he oversaw the multi-billion-dollar operation. He stopped the financial drain by executing a plan that led to record profitability, record margins and increased sales — and real racing on famous circuits was part of his schedule.

Farley emphatically assures us: “Properly tuned, my 1965 GT40 goes over 200 miles per hour. There’s nothing like driving the Le Mans circuit in France at 2 a.m. in the rain. When I get out of the car after a long hard race, you feel so calm and relaxed. It’s my yoga.”

From June 2017 to May 2019, back at World Headquarters, Farley served as Executive Vice President and President of Global Markets. From May 2019 to February 2020, he served as President, New Business, Technology and Strategy.

Jim Farley became President and Chief Executive Officer of Ford in October 2020, and in March 2022 took on the additional role of President, Ford Model e. In addition, Farley is a member of the company’s board of directors.

A Ford employee who heard a piece was being written about Farleyreached out and said, “Please remember that Jim Farley is a real guy.”

It seems, as public as he is, few really know him.

He shows up at 6 a.m. on Saturdays every once in a while – to serve meals at the Pope Francis Center. Or mop the floor. Or scrub the kitchen stove. Or staff the front desk when people come for showers.

“He just wants to be an average Joe helping to serve the vulnerable,” said Father Tim McCabe, Executive Director of the shelter formerly known as the warming center of Saints Peter and Paul Jesuit Church. “His grandfather used to bring him down when he was little. Now Jim brings his children.” 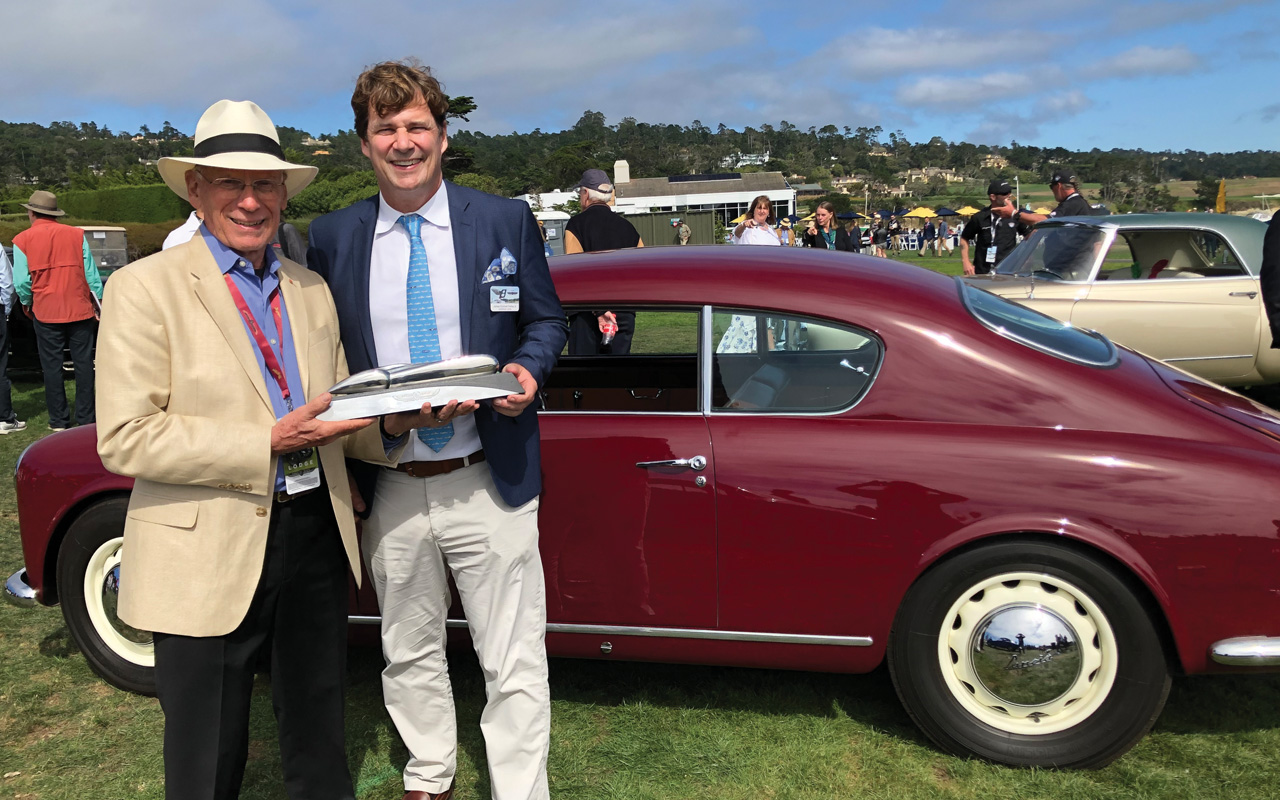 Crane and Farley with B20 trophy