A Legendary Life Force that will Never Die

Kobe Bryant’s inestimable talents and history-clinching achievements make him otherworldly: Five basketball championships, two Finals MVPs, one regular season MVP, third on the all-time career scoring list, 15 All-NBA teams, 18-time All-Star, four-time scoring champion, and the only NBA player to have a 20-year career with one prestigious team – the Lakers. His Olympic Games achievements were another extra slice of distinction: Kobe was a vital, winning component on the USA Men’s team and the two Olympic gold medals he earned with them was proof of that. He savored every moment of that thrilling experience.

The January 26th 2020 tragic helicopter accident robbed us of a life force that raised our hopes and dreams for the future: a 41-year-old man whose second chapter of life was proving to be as powerful as his first chapter – maybe more so because of his magnanimously generous heart, his irrepressible passion, and a creative gift that was burgeoning as rapidly as Kobe moved. After retiring from basketball in April 2016, Kobe went on to achieve an Oscar Award in 2018 for ‘Dear Basketball’. The world’s top performers wait around for 90 years to achieve one of those. Kobe did it within two years.

The sting we felt of being robbed of an exemplary human life intensified as we learned more about Kobe’s daughter, Gianna, who also perished in that horrendous tragedy, along with seven other souls. 13-year-old Gianna was a shining star – just like her daddy. When Kobe was being encouraged to add a boy to his family so that his son could carry on his legacy, Gianna looked at her dad with the greatest certainty and said, “Don’t worry, dad; I’ve got this”. Experts concur that Gianna had otherworldly talents, and her basketball career trajectory was set to soar as she set her sights on the WNBA. Equally as important, Gianna was already a force for positive change. In school she wrote papers advocating equal rights for women in sport.

Kobe’s fast-tracked life all started in 1996 with one simple sentence:

“I have decided to skip college and take my talents to the NBA.”

A high I.Q. and an ability to read the game accurately gave Kobe a head start. Shaquille O’Neal explained it aptly at Kobe’s memorial. During a game, Kobe turned round to Shaq and said, “These guys are playing checkers, and I’m out here playing chess.” It was so true. Kobe’s work ethic was unparalleled. Nobody sweated to perfect every move as intensely as Kobe did. When other players worked hard, Kobe worked harder. Good was never good enough. His insatiable desire to learn more, to master more, to exceed the limitations of what was humanly possible, made him the ‘all things are possible’ catalyst beneath a lot of players and fans’ wings. He called Michael Jordan at all hours of the night to ask questions, to learn more, assiduously dissect how to improve every manoeuvre on the basketball court. Self pity were banned words in the Kobe lexicon. He motivated a generation of players and kids like no other leader. About chasing one’s dreams, Kobe said:

“It’s easier said than done because I think we all have dreams. But once you go through the process of trying to make those dreams a reality, you hit obstacles. And I think, unfortunately, because of pressure or anxiety or responsibilities, things, whatever, you kind of give up on those dreams and somewhere along the line, you lose that imagination. I think it’s important that you never lose that. You have to keep that. That’s the most important thing. I never gave up my dream.”

“What Kobe accomplished in basketball, as a businessman, as a storyteller, and as a father, in life – Kobe left nothing in the tank. He left it all on the floor”.—Michael Jordan

What Kobe accomplished in basketball, as a businessman, as a storyteller, and as a father, in life – Kobe left nothing in the tank. He left it all on the floor. Kobe was my dear friend, a little brother. He wanted to know every detail about life. He used to call me, text me,11:30, 2:30, 3 o’clock in the morning, talking about moves, footwork, and sometimes, the triangle. At first it was an aggravation, but it turned into a certain passion. This kid had passion like you would never know. What Kobe Bryant was to me was the inspiration that someone truly cared about the way I played the game or the way that he wanted to play the game. He wanted to be the best basketball player that he could be, and as I got to know him, I wanted to be the best big brother that I could be. I took great pride as I got to know Kobe – that he was trying to be a better person. We talked about family – about everything. He knows how to get to you, and he brings out the best in you. No matter where he saw me, he saw the challenge, and that’s what I absolutely loved about the kid – someone who was looking to improve every day – not just in sport but as a husband and dad. Kobe taught me how to respond and react with the people he loved. Kobe gave every last ounce of himself to whatever he was doing. After basketball, he showed a creative side that I never knew he had. In retirement, he seemed so happy, he found new passions and he continued to give back as a coach and in his community. More importantly, he was an amazing dad, amazing husband who dedicated himself to his family. He loved his daughters with all his heart. He never left anything on the court, and I think that’s what he would want for us to do. We must live in the moment, enjoy the moment, reach out and spend as much time with our family and friends, with the people we love. When Kobe Bryant died, a piece of me died, and as I look at this arena and across the globe, a piece of you died. From this day forward, I will live with the memory of a little brother that I tried to help as much as I could. Please, rest in peace, little brother.”

Proof of how Kobe’s powerful legacy will live on came within 24 hours after his emotionally-charged Staples Center memorial. One of the speakers who honored him at Staples, Sabrina Ionescu, had highlighted how much Kobe had done to advance women’s basketball. As if guided by his light, the Oregon star player made NCAA basketball history a few hours later against Stanford when she collected her ninth rebound of the game late in the third quarter. She became the first player in Division I (men or women) to reach 2,000 points, 1,000 rebounds and 1,000 assists. Sabrina credited Kobe right afterwards, saying, “Your presence is felt. Just like we talked about. I HEAR YOU Mamba. Thank you KB.” 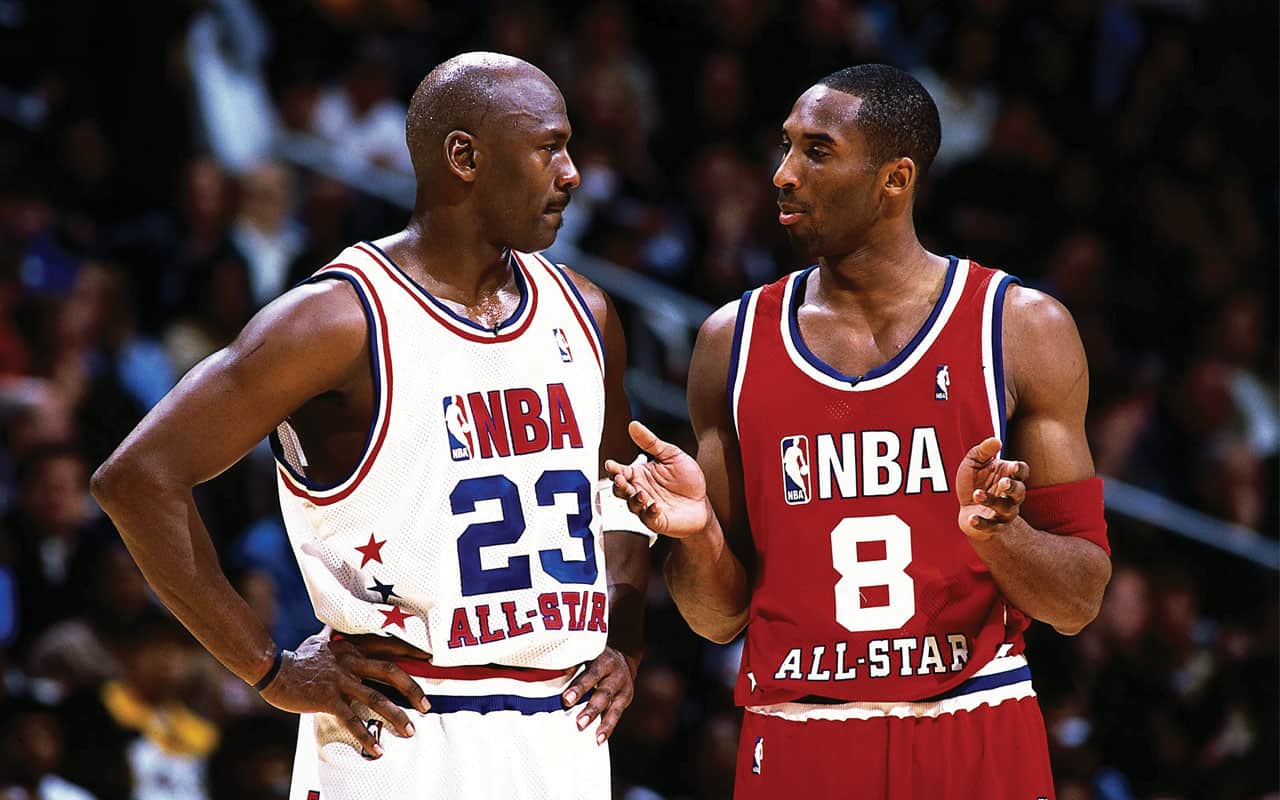 Michael Jordan and Kobe Bryant at 2003 All Star Game 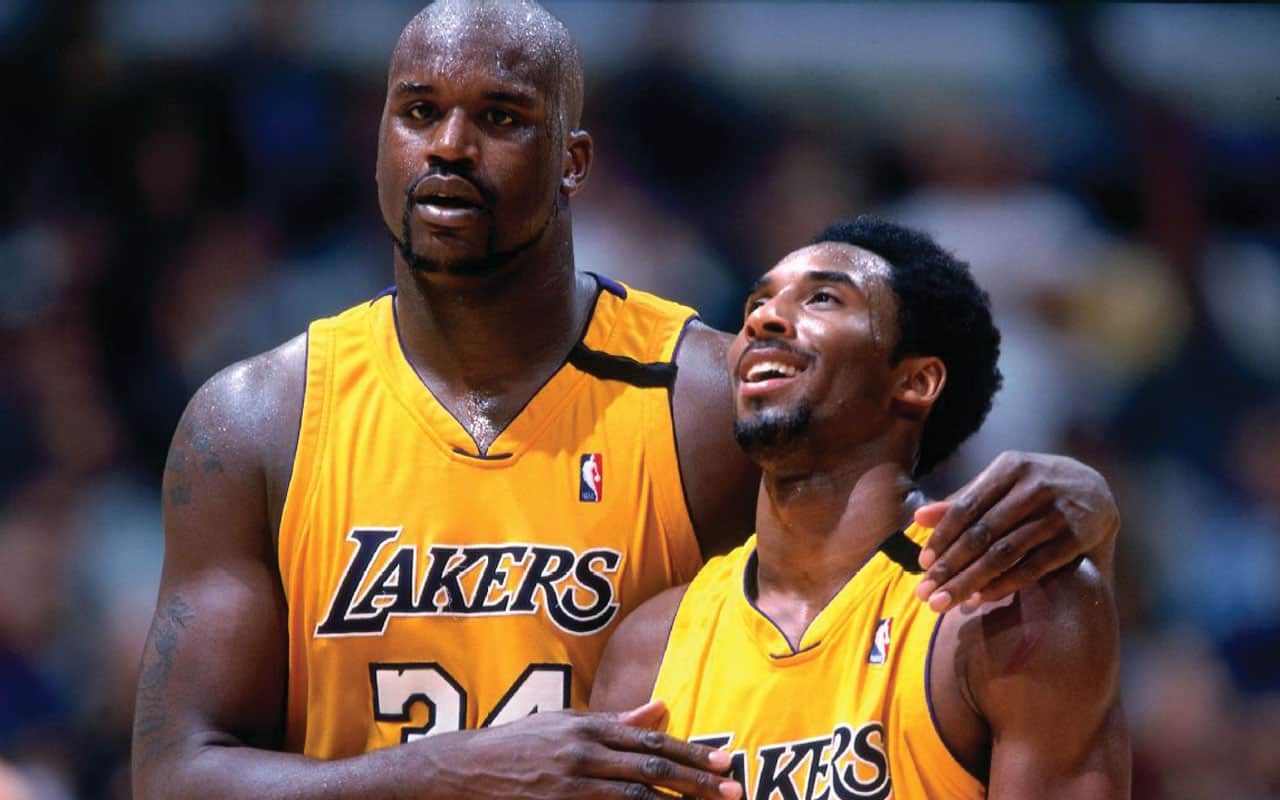 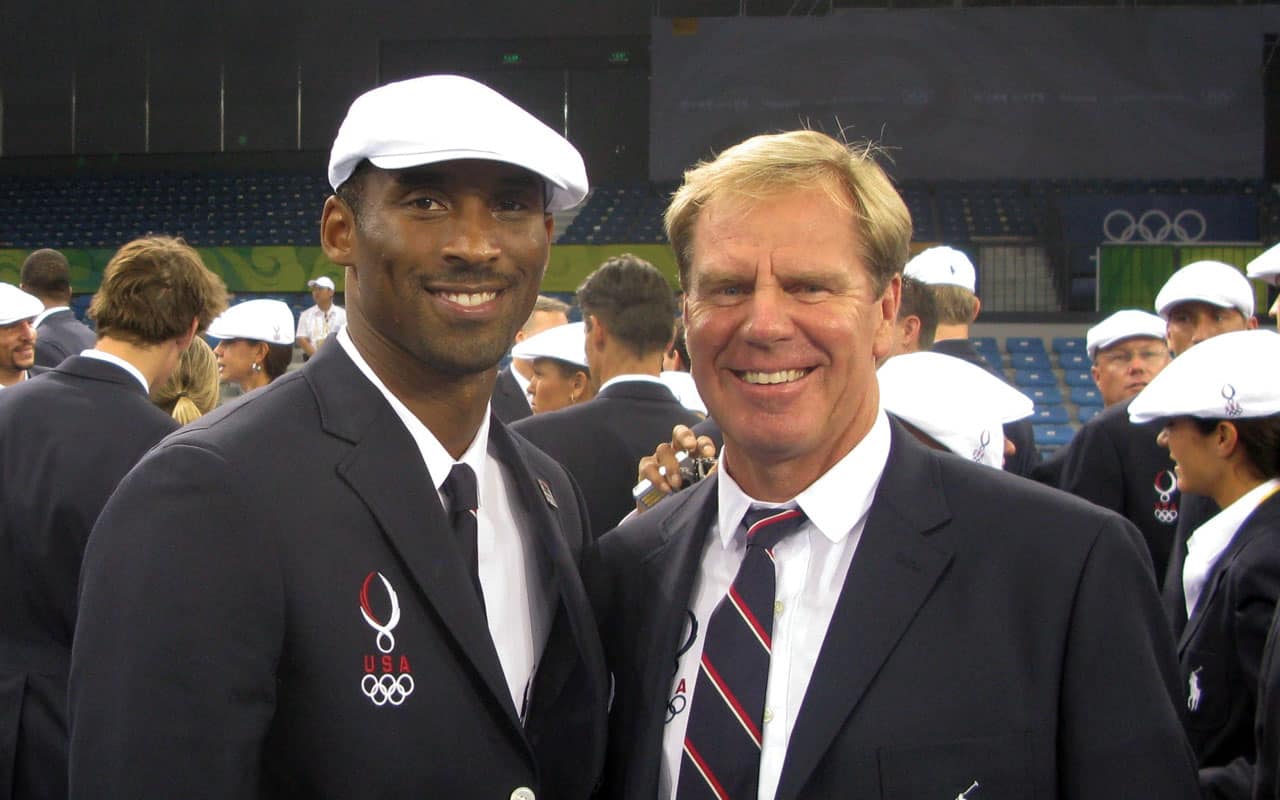 Kobe Bryant and Terry Schroeder at the 2008 Beijing Olympics